[TO THE ARTIC opens Friday April 20th at the Great Lakes Science Center.] 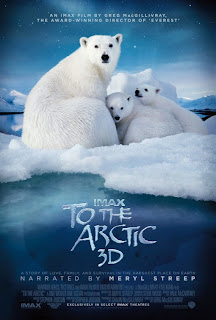 In this feature film poised to heat up the science center circuit, director Greg MacGillivray takes the audience on an expedition into the same vast and foreboding -- yet stunningly beautiful -- territory that has daunted wayward arctic ramblers and latitudinal luminaries for centuries. The voyage begins with closing aerial shots of a melting continent of ice spurting torrents of freshwater into the sea; the gorgeous waterfalls bursting from a barren white expanse almost dazzling enough to obscure any deeper concerns.  Indeed, the arctic wilderness is prime real estate for 3D immersion into the exotic and unwelcoming world that few creatures are able call home.

While the film shows how climate change is impacting everything from walruses to Native peoples, the main thrust is the plight of the polar bear, which was listed as a Threatened Species in 2008, and has long been under the auspices of the Marine Mammal Protection Act within the U.S.  We are treated to incredible ursine footage of seal hunting, play fighting, nursing cubs, and youngsters balancing on the still-frozen remnants of their shrinking habitat.


However, the focus on polar bears is not wholly due to how photogenic they are. Polar bears are actually an “indicator” species, which means that their status directly reflects the health of the larger ecosystem in which they reside.  Indicator species are more susceptible to habitat loss and changing environments due to their specialization within a narrow ecological niche.  When not able to hunt seals the way they have for millennia – by deftly tracking their prey from atop the arctic ice cap -- they are left to scavenge whatever they can find to sustain themselves and their offspring.  As narrator Meryl Streep grimly conveys, such prospects can be extremely dire.  One mother and cub swam for nine consecutive days searching for food, until her cub could swim no longer.

Beyond just bears, though, the entire arctic ice pack itself is portentous for the future of the planet, since as the ice melts less sunlight is reflected away from the water, which has a greater heat capacity than air or ice.  This accelerates the warming effect two-fold in polar regions when compared to the rest of the earth.  Furthermore, those same greenhouse gas emissions that trap heat also contribute to ocean acidification, which impedes the growth of species low on the food chain, thereby affecting entire aquatic ecosystems.

The early springs and elongated summers of melting ice also interrupt caribou migration as they journey well over a thousand miles to the western shores of Alaska to birth their calves.  The aerial shots of herds numbering over 100,000 elicit goose bumps, which slowly subside as you see their progress hindered by swollen streams, lengthening their journey and causing babies to be born before they reach their destination. It is unlikely that the young ones will ever make it to the safety of the coast, where botflies are a bigger concern than hungry bears and wolves along the way.  The inclusion of details such as this alludes to a less polished concept of nature: one decidedly more “red in tooth and claw.”  Perhaps the most grizzly aspect of nature's amorality can seen when a lone male bear stalks a mother and her two cubs with intent to cannibalize this easy prey.

That is perhaps what I respect most about this film: it never gets too cutesy nor too somber, balancing weighty conservation issues with a true sense of awe. It refuses to soft-peddle the gravity of the situation, but also basks in sheer reverie at the beauty of the landscape and the fascinating creatures inhabiting it. (3 out of 4 stars)
Posted by Ben at 12:01 AM