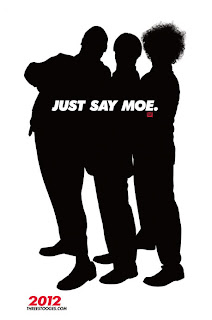 I grew up watching The Three Stooges on Cleveland's UHF Channel 43 as part of local movie host Superhost's “Mad Theatre” program that aired every Saturday afternoon. As a result, to a large extent, my sense of humor was shaped by seeing the boys smack each other around in their classic Columbia Pictures shorts. As a fan, I had mixed feelings about the idea of a new group of actors becoming modern day Stooges for a feature film directed by The Farelly Brothers (THERE'S SOMETHING ABOUT MARY, KINGPIN), but nonetheless I was willing to give THE THREE STOOGES a chance.

The Farrelly's clearly love and understand the Stooges, including the fact that the boys work best in short form – the film is broken into three separate shorts that do tie together, but could just as easily have worked on their own. As for the stars, Chris Diamantopoulos, Sean Hayes, and Will Sasso all do a splendid job of resurrecting Moe, Larry, and Curly, respectively. As good as they are, though, it's still a little distancing (not to mention kind of morbid) seeing the actors playing their roles as if they weren't themselves, but rather other (dead) actors playing those characters. Personally, I would have preferred a completely new trio of idiots with their own personalities doing more or less the same slapstick routines, but I know better than to seriously believe that would have ever gotten a green light in Hollywood.

My biggest issues with THE THREE STOOGESare with the first segment of the film, titled “More Orphan Than Not”. It's sort of an origin story for the boys, “The Stooges Begin”, if you will. This is the kind of unnecessary, "explain everything:" storytelling I hate. I don't need to see the Stooges as kids in an orphanage. I don't care how they came together. Just send them out to do some plumbing at some rich guy's mansion and throw some pies, already. I also found the way the movie rips on the foster parent system a little off-putting in a film aimed at kids, some of whom presumably may be living with foster parents.

Once the origin story is dispensed with, segments 2 and 3 actually turn out to be pretty funny. They're not perfect by any means, but if you remember the original Stooges shorts, they weren't exactly models of tight plotting. In fact if anything, the script by the Farrelly's and Mike Cerrone is too linear and logical, with not nearly enough surreal non sequiturs and sudden plot shifts to truly capture the flavor of the originals.

Adding considerably to the entertainment value of these segments are Sofia Vergara and the cast of Jersey Shore. Vergara is a perfect comic foil for the boys, and who wouldn't want to see Moe eye poke, slap, and generally abuse the hell out of Snooki, The Situation, and all the rest? In the end, though, THE THREE STOOGES just doesn't gel into a satisfying whole for me. My issues with the first segment aside, it's... okay. I can't really recommend that anyone plunk down their hard earned cash to see it, nor would I try to dissuade anyone who thought the trailer was funny from going. Despite my issues with the film, I still laughed a fair amount, but ultimately I left the theater feeling “eh”. 2 out of 4 stars.
Posted by Bob Ignizio at 12:01 AM