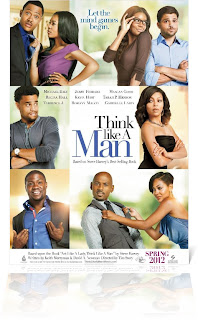 THINK LIKE A MAN stands alongside HE'S JUST NOT THAT INTO YOU in that very narrow category “Romantic Comedies Based on Self-Help Books Written by Comedy Writers.” Directed by Tim Story (BARBERSHOP), the movie is a sort of feature-length commercial for Steve Harvey's best-selling book Act Like a Lady, Think Like a Man: What Men Really Think About Love, Relationships and Intimacy, in which the comedian/radio personality (and Cleveland native) prescribes no-nonsense advice for women about how to find and keep a good man.

Harvey divides men into categories: “The Player,” “The Mama's Boy,” “The Dreamer” and “The Non-Committer,” describes how they think, and dispenses strategies for influencing these benighted souls. A sort of cross between Dr. Phil and “The Rules,” Harvey – who appears in the movie to recite his aphorisms – prescribes such methods as the “90-Day Rule” (withholding sex, or “the cookie” in this movie's parlance, in the early phase of dating) and devotes a chapter to “How to Get the Ring.”

The movie is a pleasant romantic roundelay with an appealing cast. However, Keith Merryman and David A. Newman's screenplay is disorganized and often as ragged as the duct-taped, bong water-stained sofa one of the characters is forced to part with when his girlfriend tries to reform his messy ways. The movie also suffers from a poor sound mix that renders many of the lines muffled or otherwise unintelligible.

Notwithstanding these flaws, the movie has flashes of satiric wit (not one but two jokes at the expense of Tyler Perry) and a nice multiracial race landscape that acknowledges that people of different hues do mix socially and romantically. The group of male friends at the center of the story, who meet regularly to shoot hoops, drink beer and complain about women, includes a couple of white dudes, one of whom (the one with the shabby couch) has an African American girlfriend, a detail that makes you consider how seldom mixed-race couples are portrayed in Hollywood movies.

The movie's opening, which promises more humor than the movie delivers, defines Harvey's categories of men: “The Player,” embodied by Zeke (Romany Malco), who wants only to score with women and forget them; “The Mama's Boy,” Michael (Terrence Jenkins), who's bizarrely attached to his mother; “The Dreamer,” Dominic (blue-eyed dreamboat Michael Ealy), whose last girlfriend dumped him because he was unemployed and wanted to become a chef); and “The Non-Committer,” Jeremy (Jerry Ferrara), a graphic designer whose girlfriend Kristen (Gabrielle Union), a real estate agent, not only wants him to get rid of his ratty sofa, but also his Battlestar Galactica drinking glasses and other nerd memorabilia. Buzzing around the group like a pesky fly is diminutive Cedric (Kevin Hart), who is loudly nursing wounds from his pending divorce.

On the women's side, we follow the story of Mya (Meagan Good), who's fed up with thoughtless one-night stands and aims to use Harvey's book to take the “Player” out of new love interest Zeke; her friend Lauren (Taraji P. Henson), a glamorous corporate executive who decides to lower her economic requirements by dating “Dreamer” Dominic, and coming up against his financial limitations (and crummy old car); and Candace (Regina Hall), a single mom trying to navigate a burgeoning romance with “Mama's Boy” Michael, whose relationship with his mom is frighteningly close. The movie's funniest scenes feature mom-from-hell Loretta (the excellent Jenifer Lewis) expressing her haughty disdain for Candace, whose name she deliberately mispronounces as “Tandiss.”

Many of Harvey's “rules” are often based on simple etiquette and respect. He tells women “Don't be a 'trip-trip' girl,” meaning, don't let the man sit in his car and open the locks; expect him to come around and open the door for you. (“Trip-trip!” is Harvey's imitation of the electronic lock opener.) Mya holds Zeke to this old-fashioned gallantry, exasperating him but ultimately making him respect her. (In real life, Harvey's views stray into the controversial; he once opined on a talk show that women should not date atheists, because they have “no moral compass.”)

The movie is a none-too-subtle advertisement for the book, and therefore Harvey's rules work magically, not only to attract the men, but also to make them better human beings. Slavishly following Harvey's directives, the women encourage their men to focus on their “short-term goals” and “long-term goals,” enabling the guys to straighten up and fly right, get better jobs and become moral, marriage-minded men.

The narrative calls for the men to get wise to the women's Harvey-based manipulations, get hold of the book and “turn the tables” on them somehow. But so much time is spent setting up the (too) many stories that this climax comes too late for any satisfying payoff. Difficult issues, like Lauren dumping Dominic for a wealthier guy and Michael's sick enmeshment with his mama, are resolved by a single conversation.

But that's to be expected. The battle of the sexes here is rigged against the men, because Harvey's book -- the movie's raison d'etre -- must ultimately triumph. 2 1/2 out of 4 stars.