Snowtown (April 26th and 28th at the Cleveland Cinematheque) 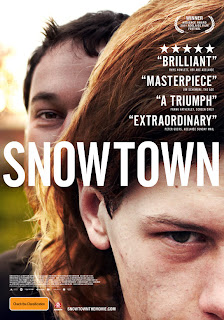 Australian Director Justin Kerzel’s debut feature SNOWTOWN is the type of movie that  tests your appreciation of cinema. It’s easy to play the fervent cinephile when all it means is doe-eyed Dorothy hauling her plaid over the rainbow or Sheriff Brody blowing Bruce into Lunchables. On the other hand, the sickening brutality and unrelenting squalor of Kerzel’s film, a dramatic recounting of serial killer John Bunting’s monstrous and grotesquely charismatic rampage through the lives of his victims and accomplices, is liable to paralyze your popcorn hand midway to the bucket.

Gut-huffing gore hounds and celluloid daredevils: that’s not meant as a challenge. SNOWTOWN isn’t a simple visual endurance test obsessed with endlessly escalating permutations of scenes showing innards turned outards. While the intermittent violence is unflinching in its cruelty, the film isn’t shocking for showing a killer’s appetite for violence, but instead for showing an abused and lonely teenager’s hunger for love and acceptance, and the lengths he’ll go to fill the emotional vacuum.


Known throughout Australia as, alternately, the Snowtown Murders (also the title of the film’s US release) and, more descriptively, the Bodies in Barrels Murders, Bunting’s crimes are all the more horrifying for having gestated amid the auspices of justice. After finding out her sons had been sexually abused by her boyfriend, Elizabeth Harvey (played here by Louise Harris) invited John Bunting (Daniel Henshall) into her home on the recommendation of a friend, who told her that Bunting was more effectual than the police. Bunting formed a neighborhood watch and declared a McCarthyist war against the suburbs’ seeming infinitude of suspected homosexuals and pedophiles. As Bunting began dating Harvey and acting as father to her boys, he and several friends formed an ad hoc sub-sect of the watch – a cultish death squad into which he slowly inducted Jaime Vlassakis (Lucas Pittaway), Harvey’s oldest boy, and the film’s protagonist.

While the reenacted murders are extremely difficult to watch (especially given that these unimaginable fates befell actual people), almost more unsettling is the way in which the neighborhood’s prejudice and hatred inadvertently fuel Bunting’s sick crusade. Heap on top of it his corruption of 16-year-old Vlassakis and it almost plays like the pitch black punchline to a wine-dark joke: conscript a man to keep your children safe from abuse, only to have him turn one of the innocents into the ultimate abuser. All the while, Kerzel’s camera drifts between shabby homes, displaced children, and dead yards littered with porch furniture and bicycles. The languid, voyeuristic style captures the bleak social reality of Salisbury North (the working class suburb in which many of the murders took place), highlighting the sad fact that Bunting didn’t bring unholy chaos to tranquil order – he offered a perverse, violent order to existing domestic chaos.

The narrative isn’t strictly linear, offering momentary glimpses of future disarray, the drifting camerawork tethered together by the disembodied voices of the victims, all of whom Bunting forced to record taped messages declaring their intentions to run away in pursuit of happier lives. Still, the movie's chronological ambivalence isn’t used toward building suspense or twisting the narrative into some Nolanesque riddle. In the same way Jaime Vlassakis is held in sway by the killer’s wicked charisma, so, too, are we hypnotized by Kerzel’s grimy tableau, with its portentous flashes of a blood-stained inevitable and the forced dishonesties of the dead blending seamlessly into the sorry reality of North Salisbury’s perpetual squalor. It’s not surprising that Bunting was able to fool a town into thinking almost a dozen people had fled desperately elsewhere leaving only a tearful voicemails behind – who would want to stay?

Henshall is alarmingly fantastic as John Bunting, capturing turn after schizoid turn from step-dad to bully to killer to friend, but it’s Pittaway’s portrayal of Vlassakis that makes the film. The actor matches Kerzel’s wandering camerawork with a similarly lost emotional stupor, embodying a sadness, rage, dissatisfaction and loneliness that ultimately, through Bunting’s manipulation, metastasize into a deadly apathy to which the character cedes free will and morality before following his surrogate father into monstrosity. (It might be a bit too dismissively glib to say he reminds me of a beefy Jesse Eisenberg on Prozac, but there it is. I can’t unwrite it.)

SNOWTOWN is not entertaining. Even Fincher’s ZODIAC and Joon-Ho Bong’s fantastic MEMORIES OF MURDER feel lighter – even popcorn-ready - for taking the perspective of the struggling pursuers rather than the deranged pursued. Even true crime enthusiasts who revel in works that peel back the cancerous psychology of sociopaths will be disappointed – Bunting’s true motives and state of mind are left chillingly mysterious as the film chooses instead to pathologize the socio-economic factors that allowed the murderer’s bigoted sadism a foothold; perhaps his murders wouldn’t have begun (or continued) if the citizens of Salisbury hadn’t inadvertently built, from their own ignorance and homophobia, a hateful niche so easily occupied by fatally maladjusted squatters.

No, SNOWTOWN is not entertaining, but, as art, it's wholly rewarding - a 120 minute-long panorama of hell that practically tattoos itself across your memory. For those of you who are in this for more than just technicolor fantasy lands or high-seas adventure, that should be more than enough reason to go. (3 out 4 stars)