She Devils A Go Go 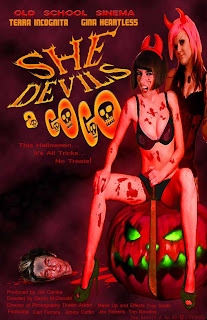 Back in September 2008, Psychology Today published an interesting piece, written by Eriq Gardner, called What Your Stuff Reveals About You. In it, Gardner breaks down art appreciation into four personality types that describe four distinct (though not necessarily mutually exclusive) breeds of culture consumers: Taste Hunters, Thrill Seekers, Self Medicators and Decorators. About Thrill Seekers, the type most associated with extroversion, Gardner says this: “[They] are drawn to art with ‘sensational elements’ – wild colors, forceful action, and themes of sex or violence.” If that sounds like a decent description of you, dear reader, then the new film by local grassroots horror production house Old School Sinema, SHE DEVILS A GO GO, will be right up your trash-strewn back alley.

When I say that this film is low budget, I don’t mean that there are a couple parts where they forgot to mask out a stunt wire. The film starts with a title card noting that SHE DEVILS was inspired by the works of Russ Meyer and Herschel Gordon Lewis. And it looks like something one of the two might have made in high school, but with more breezily unaffected vulgarity. That’s not a cheap jab – it’s an expectation-setter. Go in with your perception properly aligned (and, god-willing, a few shots of liquor) and you’ll have a good time.

Writer/Director Darrin McDonald (OUT OF PLACE) has no lofty pretensions about his characters’ goals or motivations; He even eschews character names in favor of descriptive epithets that we, as viewers, would probably assign these losers anyway: Douche Dressed in Black (Tim Novotny), Angry Drunk Douche (“Hot” Carl Ferrara), Nerdy Douche (Jim Roberts) and Preppie Douche (Jimmy Coffin). As for the story: It’s Halloween, and the four pathetic compatriots want to get drunk and laid. Unfortunately, their plans are cut short by an ill-fated visit to a fledgling nudie bar called She Devils, where the Satan-chic strippers, played with requisite voluptuous malevolence by professional vixens Terra Incognita (The Cleveland Burlesque Company) and Gina Heartless (a veteran employee of Dead Acres), are as alluring as they are sadistic.

These devils don’t have a defined back-story or M.O. beyond seducing hapless idiots and then gleefully turning them to hamburger, but that’s sort of the point – all the douches want is to satisfy their own selfish desires by finding girls they can treat like pieces of meat, but the tables turn, genitals get mutilated, etc., etc. It’s Horror 101-type stuff, and, certainly, from Russ Meyer’s oeuvre to the popularization of the final girl phenomenon, there’s been consistent debate over whether a male fetishization of female empowerment cancels out the empowerment bit, but I can honestly say I never felt squicked out by SHE DEVILS’ treatment of women. There’s actually very little nudity, and even the full-on naked lesbian shower sequence is shot with minimum ogle/drool camera lingering.

Also, you so totally want to see the annoying, histrionic douches get their beer-marinated guts ripped out.

Actually, for a movie that’s so self-effacingly honest about its utter dearth of depth, it isn’t without a narrative; Nerdy Douche’s ex-girlfriend, Douche Dressed in Black’s extra house key and Angry Drunk Douche’s favorite escort service all factor in to add some sense of order to what might have otherwise played out as a boorish, repetitive montage of blood, swearing and boobs. Adding to the structure, the story is presented as a tale from an EC-type horror comic, which, like CREEPSHOW (or the unnecessary 2005 director’s cut of THE WARRIORS), uses comic panel scene transitions that even include a couple tongue-in-cheek mail-order ads. Sure, it doesn’t dress up the thin moral binary in the sweeping melodrama and complementary plot twists of EC’s best work, but they are somewhat akin, if only in their enthusiasm for calling down supernatural justice upon sleazy creeps.

I’m acutely aware that in most cinematic arenas, it would be pretty insulting to say of a film, “I can’t believe how watchable it is.” But when dealing with ultra low-budget horror (hell – most horror these days), attaining a Length of Film : Length of Time Audience is Willing to Endure Film ratio that even approaches equality is an admirable feat. (Added props to McDonald for knowing that he could improve his odds of success by shearing the Length of Film value to a svelte 55 minutes.) Yeah, DEVILS’ dialogue isn’t consistently clever, the acting is amateurish, special effects are limited to what Incognita’s hips are capable of, and the camerawork is purely utilitarian, but all of these factors – accidental or intentional – collide to create a sensational low-budget aesthetic. In the case of this particular film, my strong geographical bias didn’t hurt the experience either – the sense of community among the players is obvious, and it’s oddly comforting to know these folks are out there, stripping, swearing and stabbing their hearts out amid the crumbling facades of Cleveland’s former blue-collar beauty.

So, there it is: I can’t believe how watchable SHE DEVILS A GO GO is.
Before you go, though, I have to confess that I conveniently failed to mention one of the other points Eriq Gardner makes about Thrill Seekers: They generally don’t watch too much TV, preferring actual human social interaction. It begs the question: what profile describes folks like me, who love “wild colors, forceful action, and themes of sex or violence,” but all day… and alone in a dark room. Oh. Right. Perverts. (3 out of 4 stars)
Posted by Matt Finley at 12:04 AM