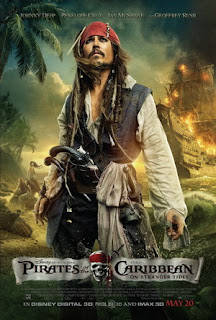 PIRATES OF THE CARIBBEAN: ON STRANGER TIDES was better the first time out, when it was called INDIANA JONES AND THE LAST CRUSADE.  As with the third JONES film, the action in STRANGER TIDES centers on a multinational race to find an enchanted McGuffin that’ll render its bearer immortal.  There’s even a “wrong cup” drinking climax.

The third sequel to the lucrative Disney franchise finds our favorite seafaring, mascara mutineer Captain Jack Sparrow (Johnny Depp) bullied into joining his sometime-girlfriend Angelica (Penelope Cruz) on a search for the Fountain of Youth at the behest of her voodoo-villain father, Edward “Blackbeard” Teach (Ian McShane).  Blackbeard wants a swig of the magic water because some fortune teller somewhere predicted that a one-legged man will kill him soon.  Hey, an ounce of prevention….

Jack’s on again-off again adversary Hector Barbossa (Geoffrey Rush) returns as a privateer in the royal court of King George II.  He learns clues about the fountain’s location after Jack makes a swashbuckling escape from London with his jailed first mate, Gibbs (Kevin McNally).  So when a Spanish armada sets out to preserve Ponce de Leon’s legacy, Barbossa and the British navy give chase.

Ah, but Barbossa hasn’t gone completely civilized; the crusty captain has his own reasons for catching up with the Spaniards—and with Jack, who is reduced to swabbing the deck of Blackbeard’s flame-throwing ship Queen Anne’s Revenge in between flirtations and fights with Angie.

The quest for the grail…er, fountain is perilous—even when the entourage converges upon the breathtakingly panoramic Hawaiian island of Kauai.  There’s snakes, poisonous toads, zombies, and ill-tempered mermaids (who hiss like the vampires from I AM LEGEND).  And while the tale is loosely based on a book by Tim Powers, the glimpse of de Leon’s moldering corpse recalls the Francisco de Orellana crypt scene in the most recent INDIANA JONES adventure.

Replacing trilogy director Gore Verbinski, Rob Marshall (MEMOIRS OF A GEISHA) substitutes the romance of now-absent Will and Elizabeth with playful—if pointless—innuendo between Jack and Angelica.  It’s hard deciding which long-haired brunette is prettier—Jack or his female foil (at one point, it’s impossible to distinguish between them).  They’re both stubborn and equally skilled with a blade, and while they have true regard for each other’s safety, they just can’t commit emotionally.  Oh, and there’s also a love connection between a mermaid and a missionary, who find common ground as Blackbeard’s reluctant guests.

PIRATES aficionados will enjoy this latest chapter.  Depp is a dandy buccaneer indeed, and his bold, opportunistic Jack will keep diehards from missing Orlando Bloom and Keira Knightley.  The competently executed—if not cinematically memorable—stunts include a carriage chase, lighthouse skirmish, and tropical cliff-jump.  The 3D is applied to the usual elongated (phallic) objects, i.e. swords-in-faces.  And Hans Zimmer’s score (buoyed by some fetching flamenco) is appropriately sprightly.  But the franchise is in danger of capsizing.  The latest installment is a merry romp—but (literally) lopes on a peg-leg for many of its 140 minutes.  Youngsters will marvel at Jack and the hearty Arghs but won’t comprehend much. 2 ½ out of 4 stars.
Posted by Bob Ignizio at 12:01 AM