Red Desert (April 14th and 15th at the Cleveland Cinematheque) 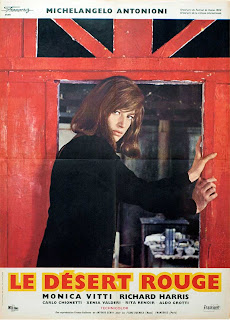 "There is something terrible about reality," observes Giuliana (Monica Vitti) in Michelangelo Antonioni's 1964 ode to industrial anxiety and alienation. Through his carefully concocted cinemascape of smoldering dirt mounds and smokestacks, we follow Guiliana as she plods through the foggy uncertainty, seeking a way to feel attached to her physical and social surroundings. Much to her dismay, she always remains psychologically detached, whether it is from her son who selfishly feigns polio, her clueless husband, Ugo (Carlo Chionetti), who never realizes the truth about her "accident," or even her more perceptive lover, Corrado (Richard Harris), with whom a tryst becomes much more erratic that erotic. While all of her angst-ridden flailing with her husband's business associate yields no deep romantic payoff, it does underscore the previously introduced notion of Guiliana as a character impervious to distraction. Her world is one of suffocating isolation in which she exists anachronistically, her longings revealed as she tells her son (Valerio Bartoleschi) the story of a young girl living simply and happily on an island with pristine beaches, clear water and wildlife. As such, she finds herself unable to relate to a society mired in a mania for business and technology, while she is simultaneously incapable of adapting through means of escapism and delusion.


At one level, RED DESERT calls into question whether the conventional notion of civilization's progress is at all existentially fulfilling, or whether we have our collective eyes on a future that only looks good from afar. From Guiliana's perspective, it appears that the sum total of most human pursuits is just one big, vapid distraction with caustic consequences. Perhaps more interestingly, though, the film seeks to determine whether the residues of human progress can also be beautiful. Unlike his main character, whose melodramadness culminates in a desperate dockside soliloquy, Antonioni instead appears to revel in the noisy environments and blighted regions, digging into the toxic muck of modernity to find the visual poetry of pollution.

While RED DESERT successfully makes a cinematic argument in favor of a perverse aesthetic that heralds the coming of a denatured humanity - one to which Guiliana fails to adjust her classical sensibilities - I am still not quite so convinced of the beauty of toxic plumes. Perhaps Antonioni himself felt conflicted as well, since he ends with Guiliani telling her son how the birds have adapted to human progress by simply avoiding the deadly spew of petrochemical waste into the sky. The ambivalence here is related to whether such aversion may be preferable to acceptance (or even reverence) when beholding despoiled landscapes. Being a resident of Northeast Ohio, of course I understand the bleak beauty of dilapidated infrastructure and industrial monstrosities, but the environmentalist in me still feels a little uneasy celebrating the art of defilement. Still, I was open to the idea, and while many shots did possess an undeniable charm and allure, on the whole I was not as overwhelmed by the cinematography as I had hoped to be. (2 1/2 out of 4 stars)
Posted by Ben at 12:01 AM