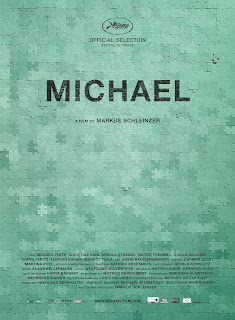 MICHAEL is the kind of movie that will no doubt lead some to question why anyone would want to watch such a thing. There's no question of quality here – this film, the directorial debut of Markus Schleinzer, is about as perfectly executed as one could want. That's provided, of course, that what one wants is a stark, chilling, and completely unsensationalized look at a pedophile.

Michael (Michael Fuith) is a plain looking man who works at an insurance company and essentialy personifies the phrase “the banality of evil”. Neither his family nor his co-workers would ever suspect that he has a 10 year old boy (David Rauchenberger) locked up in his basement. As we see him feeding the child, taking care of the boy when he's sick, even taking him on trips to the zoo, we can only imagine that in some sick way, Michael has convinced himself that he's actually parenting the boy.


We do not see any scenes of actual molestation. Instead the film opts to convey its horrors through suggestion and implication, which is quite effective enough at inducing queasiness in the viewer. One scene at a dinner table, however, is less visually restrained and may well cross the line for some viewers, even those not already driven off by the subject matter and general tone of the film.

Schleinzer makes no attempt to explain why Michael is the way he is, or to generate any sympathy for him. In Schleinzer's view, the man is a monster, pure and simple, and there is nothing that can or should mitigate that fact. The film does offer occasional moments of pitch black humor, and eventually there's a catharsis of a sort, but those are rather small rewards for enduring an hour and a half of grim unpleasantness.

Of course there are those who find depictions of the darker aspects of life interesting in and of themselves, and on that level 'Michael' is certainly an egrossing and expertly crafted film. Anyone else is advised to exercise their personal judgment as to whether or not they want to watch a film which depicts such a disturbing scenario with such a cold and detached eye. 3 out of 4 stars.