A Man Escaped (April 6th and 7th at the Cleveland Cinematheque)

[A MAN ESCAPED screens Friday April 6th at 7:30pm and Saturday April 7ty at 5:15pm at the Cleveland Cinematheque.] 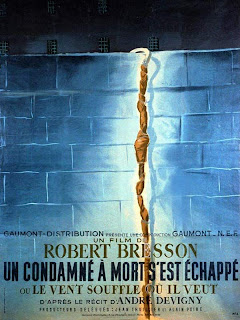 When a film gives away its ending in the title, you can safely shift your attention away from questions of what the character's fate will be, and start asking who that character is, and how he will get there. In this 1956 film, Bresson intimately connects us to the experience of Fontaine (François Leterrier), a guest of the Gestapo already making his first clumsy escape attempt in the opening scene as he is being transported to Fort Montluc prison in Vichy France during World War II. Once consigned to his cell, Fontaine spends the vast majority of the film alone and unable to openly communicate with other prisoners, many of whom also have been implicated - through either detection or betrayal - as part of the Resistance to Nazi occupation, and all of whom are dealing with their circumstances with varying degrees hope, cunning, and bravery.


The cell that Fontaine inhabits for the bulk of the film becomes a constricted reality as grim as it is narrow. Every sound, whether knuckles rapping lightly on the walls of a conjoined cell, a guard's keys clanking along the balusters, or the crunching of gravel under nervous feet, takes on a heightened significance. Unwilling to resign to despair, Fontaine patiently plots his escape, aided in no small part by Orsini (Jacques Ertaud), a less patient co-conspirator whose fatal mistake does not go unheeded. Perhaps the greatest tension, in a film rife with bated breaths and lockjawed anxiety, comes after Fontaine's new roommate suspiciously arrives just after Fontaine is handed a sentence of death for his alleged crimes. Neither he nor the viewer, who is also prepping for his big escape, are quite sure whether the newcomer is to be trusted, or just what Fontaine might be capable of if he isn't.


A MAN ESCAPED creates suspense by constraining our experience to that of Fontaine, forcing us into the same claustrophobic space where his unflagging focus and determination are the only things keeping the walls from closing in on him completely. It is not just the mechanics of the breakout that fascinate, but also the keenness and fire behind the eyes of the protagonist that resonate with something transcendent amidst the slew of anonymous captors and the ever-present weight of oblivion always threatening from just outside the frame. Bresson's cinematic austerity highlights a subdued humanity by allowing it to shine without embellishment.

Interestingly, A MAN ESCAPED is based on the memoirs of André Devigny, an iconic member of the French Resistance who escaped Montluc prison in 1943, the exact same prison where this film takes place and was filmed. In fact, Devigny served as an adviser for this film, and parts of it were shot in the very cell where he was held. Furthermore, Bresson himself had served approximately a year as a German prisoner-of-war, which no doubt lends to the air of credibility. (3 1/2 out of 4 stars)
Posted by Ben at 1:25 AM