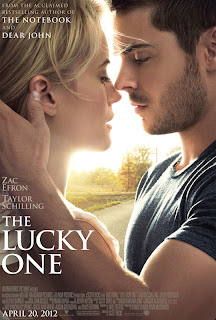 The latest piece of romantic fluff based on the writing of Nicholas Sparks (THE NOTEBOOK, DEAR JOHN) is THE LUCKY ONE. In it, Zac Efon plays Sergeant Logan Thibault, a young Iraq War veteran who believes that the picture of an unknown woman that he found after a firefight is a lucky charm that kept him alive through his three tours of duty. Upon being discharged and finding he has difficulty reintegrating into civilian life, Logan decides to track down the woman in the photo under the assumption that if he can thank her, that will somehow get him past his psychological issues.

Thanks to a prominent landmark in the photo, Thibault is able to figure out where it was taken, and along with his faithful German Shepard he sets off on foot across the country to find his guardian angel, who turns out to be divorced mom Beth (Taylor Schilling). Of course Logan can't bring himself to tell her the truth about why he's walked across the country to show up at her doorstep. Of course he bonds with Beth's son (Riley Thomas Stewart) and mother (Blythe Danner). And of course, he butts heads with her privileged, borderline psychopathic Sherrif's deputy ex-husband (Jay R. Fergusson). Looking for believable, nuanced characters and situations? Look elsewhere.

Competent directing and cinematography compensate a little for the bland acting and by-the-numbers plot to some degree. And I do have to give director Scott Hicks credit for probably the most erotic scene of a woman washing a pot ever committed to celluloid, and in a PG-13 movie, to boot. Heck, as predictable and silly as it is from the get-go, I was almost willing to give this film a pass. Up to a point, although the film has by no means been good, it's probably good enough to satisfy those looking for a lightweight romantic melodrama. But then the third act arrives with a thundering, over the top stupidity that washes away any semblance of a decent film.

So here's the thing, folks. I'm no big stickler for realism, and I'm a firm believer that a movie's plot is not necessarily the most important thing about it. However, when you have a movie like THE LUCKY ONE which purports to take place in something resembling the real world while offering up characters who behave in a completely unbelievable manner, a movie that furthermore has absolutely nothing else going on besides it's surface storyline – well, that's pretty much a failure in my book. 2 out of 4 stars.
Posted by Bob Ignizio at 12:01 AM