Little Otik (April 19th and 21st at the Cleveland Cinematheque) 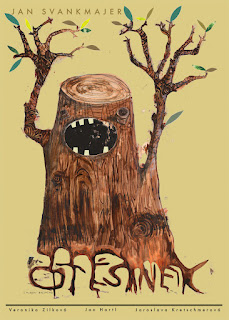 Someone once described the movies of Jan Svenkmajer as unbalanced Czech accounts. I think it was me, in fact. I've seen and written about sooo many movies. They kind of blend together. Should've done something worthwhile with my life, conceivably, but there do exist people who actually get decent money just for piddly things like calling Jan Svenkmajer movies unbalanced Czech accounts. For a little bit there I thought I could be one of them.

Svenkmajer, a surrealist artist-animator and master of macabre visuals and juxtapositions, in 2000 conjured up one of the more foreboding (and lesser-known) fairy tales from the canon of the Brothers Grimm and modernizes it into this morbidly humorous feature. Yes, old news; ever since LEPRECHAUN (really even before THE COMPANY OF WOLVES, when you think about it, but those earlier ones had class), filmmakers have been mining fairy-tale material and spinning darker, if not outright genre-horror takeoffs.

But Svenkmajer's OTESANEK (the film's alternate titles are LITTLE OTIK, BABY OTIK or GREEDY GUTS) isn't horror-nerd schlock for the Fangoria subscribers. The dark fantasy intertwines the filmmaker's brand-name stop-motion animation with equally strange live action. Setting is a modern-day environment wherein baby fever takes on nasty dimensions. Pretty Bozenka Horakova and her husband Karel
find out that they can't conceive a child, and the world is suddenly fecund with images of fetuses, bodily fluids and fertility (to see 's idea of this vibe, compare-contrast with the Greg Kinnear/Lauren Holly rom-com A SMILE LIKE YOURS. I did this. Because none of you were there to perform and intervention and save me. Damn it).

Karel takes an uprooted tree stump and carves it into a gnarled, doll-like wooden figure to give to his wife as a surrogate. The trick works all too well. Bozenka goes quite insane, faking her pregnancy (right down to imitation morning-sickness vomit) whilst doting on the totem as though it were a flesh-and-blood infant. And Bozenka's obsession results in the `birth' of "baby Otik" as a real living...thing, a writhing, whining, inhuman monstrosity that the screen's two creepiest Davids - Lynch and Cronenberg - wish they'd dreamt up first.

Anyway, the grotesque little being possesses an insatiable, ravenous hunger. And when he's eaten all the food that Karel can bring, well...Let's just say that if Roger Corman and myself are ever stuck in an elevator together for several days I hope I've got the presence of mind to ask if this same Brothers Grimm material "fed" into LITTLE SHOP OF HORRORS.

Svenkmajer uses his stop-motion to - bring Otik to life, in addition to some nasty little “traditional” cartooning to more or less convey the storyline of the Brothers Grimm original. Yes, I’ll admit the ending is a little on the weak side, but getting there is most of the grim Grimm fun.


Aren't there, what, like five or six dark-side-of-Snow-White movies out this year alone? Ignoring the three or four previous dark-side-of-Snow-White flicks that had already been done. Somehow I blame the TWILIGHT franchise for all these Mother-Goose-Gone-Bad movies, studio suits figuring that with the only moviegoers with disposable income being the 12-to-18-year-olds-in-custody battles, sinister reboots of their old bedtime tales back from the pre-011 days when dad had a job and he and mom were still together are a natural draw. OTESANEK, I’m glad to say, stands outside that facile market-profile gimmick.


Though, now that I muse upon it, a teen-horror takeoff on Anderson’s original, non-Disneyfied, “The Little Mermaid,” which is quite a tragic and downbeat tale, could be of interest. Or at least preferable to the sexed-up remake of CREATURE FROM THE BLACK LAGOON that Universal’s been threatening for ages. (3 out of 4 stars)
Posted by Charles Cassady Jr. at 12:27 AM