Lancelot of the Lake (April 21st at the Cleveland Cinematheque)

[LANCELOT OF THE LAKE screens Saturday April 21st at 5:15 pm at the Cleveland Cinematheque.] 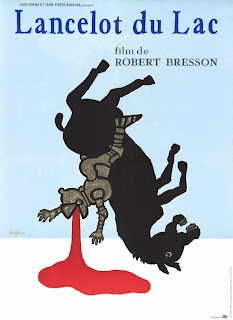 Now that LeBron James has left, the only thing significant about , as we all know, is the at the Cleveland Museum of Art. The is a Ridley Scott movie-fan's dream come true, all those gleaming suits of authentic European chainmail, armor, swords and headpieces, hundreds of years old, in a world-class collection. Feeding the King Arthur and St. George fantasies of generations of museum-goers, the Armor Court lacks only Scooby Doo and Shaggy hiding in a couple of the suits to escape, I dunno, the Egyptian mummy the next couple of corridors over.

If there was an "! The Motion Picture," it would sure look like LANCELOT OF THE LAKE, or to those of you non-Ohioans who don’t believe in “Freedom Fries” (look that one up online, you kids; yes, we’ve had some real winners as politicians here in Buckeye land) Lancelot du Lac. It’s a dour 1974 dramatization of the end of Camelot, as interpreted by French filmmaker Robert Bresson.

This is no Broadway musical or even a Wagnerian John Boorman Celt-gasm (the way EXCALIBUR was), but a joyless, flat depiction of the Arthurian dream failed. It begins with a bloody massacre of armored knights right out of MONTY PYTHON AND THE HOLY GRAIL and flashes back from there to how this dismal outcome came to pass, as the last act in the King Arthur saga (fortunately, we are spared Bresson’s vision of the first two acts).

It seems that after the (unseen) Merlin the Merlin sent the Knights of the Round Table out to find the Holy Grail, most of them got killed. Only the virtually invincible (and French) Sir Lancelot du Lac (Luc Simon) returns to the depleted and directionless Camelot, where he resumes his taboo secret affair with Queen Guinevere (Laura Duke). One of the few knights smart/wicked enough to sit out the Grail quest, Mordred, begins a jealous whisper campaign against Lancelot and Guinevere, while the remainders of the shattered Round Table act out their frustrations in jousting tournaments. Finally, the knights split into two factions, one loyal to the fugitive Lancelot and Guinevere, the other manipulated by Mordred (but still, paradoxically, idolizing Lancelot all the same), for the gory denouement.

As action-packed and passionate as this sounds – it just isn’t. Even non-French speakers will detect that the thespians are just reciting their lines in unexcited monotone, whatever the occasion. Scenery remains small-scope and mostly antiseptic, there is nearly no background music (the ambient noise of clanking, clunking armor may be a surrogate). Overall the ambiance is as dispirited as as a  job search (talk about a fruitless Grail quest).

Bresson’s skills as a world-class filmmaker are undeniable, so what gives that this legendary material is shot in an unedifying fashion? Maybe Bresson is trying to avoid the trap so many Hollywood filmmakers fall into; in a Camelot which has lost sight of the Grail (possibly because of Lancelot’s indiscretion with the Queen) this very Catholic film director is trying to show a lifestyle in which God and morality have been lost. Now when the likes of Cecil B. Demille depicted Sin with a capital S in their Bible epics, it looked pretty glamorous and fun; the rubes were buying tickets to see the orgy and the gladiators in the arena just as much as the redemption. None of that for Bresson! These are doomed souls, marching (or riding) zombie-like to their own destruction, and even Lancelot and Guinevere don’t appear to be much enjoying themselves at all in their very chaste adultery scenes.

So there you are. Or, maybe Bresson just didn’t have his heart in this one. Frankly (or Frankishly) it’s really hard to tell. And narrative confusion sets in with a late development (I think) in which Lancelot changes from his usual dark armor into a different set so nobody can tell who/where he is. Or did I just lose interest, like everyone else? Anyway, it’s no thrill ride, and not traditionally entertaining, unless you’ve got an armor fetish. For which I repeat, Boorman’s EXCALIBUR, now on DVD, still holds the crown, and young Helen Mirren was just as smokin’ hot as, well, old Helen Mirren.

But, speaking as someone old enough to remember the production’s time period (NO, NOT MEDIEVAL DARK AGES YOU STUPID, TATTOOED, TWEETING, SEXTING, FACEBOOKING TWENTYSOMETHING TWERPS!), namely the mid-1970s, avec Watergate, Vietnam, post-hippiedom disenchantment and mainstream movies that actually flirted with adulthood…I must say the tone of bleak disillusionment does strike an appropriate contempo chord, take it or leave it, and most people did indeed want to leave it, for the nearest disco and/or coke spoon.

Heck, today even the French producers would ask Robert Bresson to step aside and hand the reins over to Luc Besson instead. Who would somehow find a place in Camelot for parkour, a car chase and RPGs.

As you might recall, the government of recently made Cinematheque director John Ewing honorary Knight for his promotion of French culture via cinema. Does that mean that if things go really bad for he might run amok like Lancelot and decapitate lots of arts folks? Hey, just trying to give us peasants something to look forward to. (2 out of 4 stars)
Posted by Charles Cassady Jr. at 12:01 AM