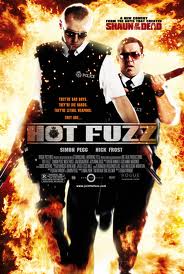 Usually it's the worst cultural offense whatever, to my way of thinking, but you know...if they did an okay but unnecessary Americanized remake of the Britcom DEATH AT A FUNERAL, maybe a Yankee refilming of 2007's HOT FUZZ wouldn't be so bad either. Mainly because more American viewers in this probably-would-be-smarter-if-they-hadn't-revolted-in-1776 country might finally get UK director Edgar Wright's high-concept joke, one which (even with Wright and cast members coming red-hot off the success of SHAUN OF THE DEAD) seemed to elude some audiences and even critics here, when the schtick happened with British actors and English locations.
The basic idea is what would happen if a stereotypical movie hard-charging, lone-wolf, one-man-army city cop were banished to the sleepy boondocks (horrors, ?!) to enforce the law. The Dirty Harry substitute here is Nick Angel (Simon Pegg), a super-tough-guy constable who has a bad day after a raid degenerates into one of his chronic stunt- and gun-fests. His tactical-forces girlfriend breaks up with him and his typically angry superior at the Yard arranges Angel's punitive transfer to a cozy little English village called Sandford, where nothing ever happens. There the fish-police-out-of-water (shoutout for "Fish Police," anyone remember that failed TV cartoon? Or was it all a bad dream I had?) Angel gets assigned an oafish local guy Daniel (Nick Frost) as a partner, and the duo have to watch out for lawbreakers in the sort of suburban-pastoral environment where Wallace & Grommet normally dwell, full of antique shops, rolling meadows and the annual town fair, not urban mayhem.
Nick, naturally, overreacts to every little thing, including a few strange accidents that befall locals [SPOILER ALERT], but the great conceit of the Simon Pegg/Edgar Wright script is that, yes indeed, Sandford actually is a churning hotbed of dastardly crime and ultimate corruption  (horrors, ?!). The local aristo (Timothy Dalton) turns out to be chieftain of a sort of devil-worship secret society made up of all Sandford's gray-haired matrons and nice old chaps, whose racketeering secretly control everything, and they kill everyone who doesn't obey. And so Nick has to again swing into violent action, with squealing tires (or tyres) in chases on the old countryside sheep-path motorways, and blitzes of artillery rounds get discharged in such unlikely settings as the aisles of the town market, fired at some murderously marauding old Anglo-Saxon gentry.
Yes, it's kind of a one-joke movie, but so was SHAUN OF THE DEAD, in its fashion, and both are spun out with great gusto and contagious enthusiasm, and in HOT FUZZ the budget allowed some fine Commonwealth thespian talent, including Bill Nighy, Cate Blanchett, Billy Whitelaw and Edward ("The Equalizer") Woodward to cut loose and go along with the genre farce and over-the-top action. Action that was made, I suspect, even more over-the-top to sate the SHAUN OF THE DEAD fandom expecting more splatter-gore slapstick.
Would it be better, really, if it had been Sylvester Stallone bumped down to patrolling, I don't know, rural , partnered with Zack Galifinakis? Maybe results would be comparable if Pegg and Wright wore the filmmaking badges. But it wouldn't have been the same.
(3 out of 4 stars)
Posted by Charles Cassady Jr. at 12:01 AM