Goon (opens in Cleveland April 27th at the Capitol Theatre)

[GOON opens in Cleveland on Friday April 27th exclusively at the Capitol Theatre.] 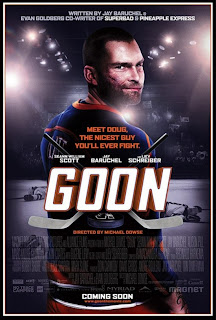 As a huge of fan of television’s Friday Night Lights, I know how this sort of thing plays out, and I feel bad for Michael Dowse’s GOON. It’s such a winningly positive, effortlessly funny and just all-around competent bit of comedic filmmaking, it’s a shame that there are gonna be mobs of folks out there who politely opt out just because  the whole shebang is swaddled in the uniform of a Sports Movie. And, sure, there’s a Zamboni-load of hockey scenes, but if you know the bare minimum – skates, ice, puck, and panting, exhalations of crystalized air pregnant with the promise of raw fist-to-face tooth-displacing mayhem – you are fully equipped to dig this flick.

Just as the speedy grace and raw precision of hockey can be flash fried down to knocking a puck into a net, so, too, can GOON’s premise be stripped to a single joke : thick-skulled bouncer gets drafted onto hockey team to KO opponents… Commence dim-witted skull punchery. I’d be lying if I said that GOON, penned by SUPERBAD co-writer Evan Goldberg and writer/actor Jay Baruchel (the star of Undeclared), didn’t take full, nose-shattering advantage of its premise -  Seann Willam Scott’s (ROLE MODELS) protagonist Doug “The Thug” Glatt’s total thrown punches almost outnumber his lines spoken– but the familiar plot is  bolstered by such a rich, enjoyable world of supporting characters that the movie’s lack of narrative surprises turns out to be one of its most welcoming traits.


It helps that most of the jokes aren’t  based on a punchline or wacky scenario as much as they are on each character’s individual personality and peccadilloes. While every character boasts a predictable idiosyncrasy– there’s an ex-wife-obsessed alcoholic team captain, a toadying rookie, a nails-tough, sailor-mouthed manager and a former rink star who has snorted and humped away his last remnants of good will – each is given a clear emotional arc, and no one, save for Jay Baruchel’s crotch-grabbing, cunilingus-miming Masshole, bites off more scenery than he can chew. Even the requisite zany announcer is used sparingly, and is all the funnier for it.

Though nicknamed “The Thug” for his unmatched potential for violence, Scott’s character is about as kind-hearted and earnest as they come – which is good, because he’s short some inventory in the brains department. Unlike most dimwitted characters, though, Glatt is refreshingly self-actualized – he doesn’t have the delusional narcissism of Derek Zoolander or the galumphing obliviousness of Harry or Lloyd; He has no false notions about why he was hired to play for the team, and is legitimately thankful for each and every knuckle-bruising second he gets to spend on the ice. It’s one of Scott’s best performances, conveying childlike enthusiasm and a genuine work ethic with just enough assertive brute force and confidence to cut through any cheapo sympathy we might otherwise feel.

All that gap-toothed grinning positivity begs the question: Where’s the conflict?

GOON is based on Goon: The True Story of an Unlikely Journey into Minor League Hockey, a memoir written by real-life enforcer Doug Smith with help from author Adam Frattasio. The film captures the feeling of biography at least in that it doesn’t distill Doug’s story into a clear-cut narrative arc leading up to a single, demonstrative climax. There is, of course, the inevitable underdog aspect that finds the rag-tag team shambling their way up the leaderboard, the inevitable love story as Doug shyly obsesses over an already-spoken-for firecracker of a hockey fangirl(Alison Pill), and a rival player in the form of Ross “The Boss” Riev (Liev Schreiber), a notorious, retirement-bound enforcer, and Doug’s idol.

It’s this latter arc that serves to underscore some of the film's larger themes. Fans are desperate to see newcomer Doug and veteran Ross go head to head at least once before The Boss retires, and, though the movie is far from coy about the fact that things will culminate in this anticipated brawl, it compensates for the lack of suspense by using the pending battle to contrast the two players’ attitudes toward the sport, and the relationship between hockey and violence. If the fights, the retribution and the brute physicality are facets of the actual game, then Enforcer is a vital position, and the holder of this position is a player of consumate skill; if, instead, they are side effects – the result of competitive machismo as inflated by the ignoble cultural traditions associated with the sport  –  an enforcer is nothing more than a graceful thug, a padded goon briefly gliding out amongst athletes to lay down the smack and, just as quickly, disappear.

I can't necessarily say that GOON is funnier than SLAPSHOT, but I can say it's exactly as profane and bloody as you wish D3: THE MIGHTY DUCKS had been. (3 out of 4 stars)
Posted by Matt Finley at 12:01 AM