The Flowers of War

[THE FLOWERS OF WAR screens Saturday April 14th at 7:15 pm and Sunday April 15th at 3:30 pm at the Cleveland Cinematheque.] 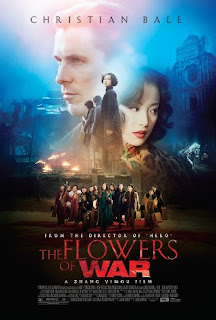 It’s 1937 and the marauding Japanese army is running roughshod over ’s former capitol.  has already fallen.  is next.  Corpses litter the streets and buildings are reduced to rubble.  Two dozen schoolgirls are left to fend for themselves inside the gated Westchester Cathedral after their priestly caretaker dies.

Who better to protect them than Batman?

Academy Award winner star Christian Bale (THE DARK KNIGHT RISES) plays John Miller in Zhang Yimou’s new historical drama THE FLOWERS OF WAR, a compelling examination of lost innocence and redemption found set against the backdrop of the “Rape of Nanjing” three years before the United States entered the global fray that would be known as World War II.

Miller is an opportunistic American mortician when first we meet him wandering into the ravaged city.  He carries a tattered burlap sign identifying himself as a Yankee so the invaders won’t shoot or bayonet him along with the Chinese villagers.  The body of the priest he’s supposed to inter has already been disposed of, yet he insists on payment from the padre’s houseboy—George “Little Shit” Chen—and is angered when he finds the collection boxes empty.  Cutting his losses, Miller decides to stay a while in the priest’s lavish quarters and numb himself with church wine.  He’s no less selfish than the Japanese intruders outside the gates and every bit as morally ambiguous as the bevy of perky prostitutes who hop the wall seeking shelter with the repulsed schoolgirls.

Miller’s cynicism reaches a breaking point when Japanese soldiers storm the sanctuary and wrangle the girls for some less-than-noble entertainment.  Donning the dead priest’s robe and collar, the mortician asserts himself as the resident chaplain and implores the attackers to be “honorable men.”  Fortunately, the lone surviving Chinese trooper in the area creates a diversion with a sniper rifle and some cleverly-placed munitions.

A homesick Japanese colonel (Atsuro Watabe) visits later to apologize for the barbaric behavior, but insists the convent girls come sing for his superiors at a swanky Imperial victory celebration.  Miller, knowing the “invitation” will only subject the girls to further abuse, hatches a plan to transport them out of the fallen city and enlists one of their collaborator fathers, Mr. Meng (Cao Kefan), to help with the escape.

Meanwhile, Miller falls for the lovely (Ni Ni), leader of the courtesans hiding in the church cellar.  A fascinating rivalry develops between the seductive Yu and wholesome Shu (Zhang Xinyi), who emerges as the spiritual center of the uniformed teens (and who narrates the tale in retrospect).  The hookers initially see the kids as privileged and unworldly, while the students regard the women as whores.  But sisterly bonds eventually blossom between the two female parties (thus the film’s title), preconceptions are laid to rest (along with several friends), and everyone learns a lesson in humility.   The peculiar juxtaposition struck between the choirgirls and prostitutes isn’t resolved until the climax, wherein everyone—including Chen and Meng—must sacrifice in order to spare the children a fate worse than death.

Based on a novel by Yan Geling, FLOWERS was a blockbuster in Yimou’s native last year.  The adaptation benefits from the director’s experience translating the violence vs. virtue subject matter to the screen in previous works like NOT ONE LESS and HOUSE OF FLYING DAGGERS, and cinematographer Zhao Xiaoding is nothing less than a master painter behind the camera, contrasting beauty with brutality.  One poignant—if horrific—shot has a girl take a bullet in the throat while transfixed before the cathedral’s brilliantly-illuminated stained glass window.  Bale likewise milks the conflict inherent in his character, morphing from haggard, bearded chain-smoker to clean-shaven, sterling-hearted savior (the Batman actor has played Christ before, incidentally, in MARY, MOTHER OF JESUS).  It’s no small metaphor that his mortician’s skills are tested in saving the lives of the young ones who look to him as a surrogate parent; Bale becomes the Father Flanagan (BOY’S TOWN) of the Second Sino-Japanese War.

FLOWERS has some of the most authentic-looking battle sequences this side of SAVING PRIVATE RYAN, and most of that action occurs within the first fifteen minutes.  Bullets fly, grenades are lobbed, a tank smashes through a wall, and Bale hunkers with a pair of kids in a drainpipe (his dousing with flour might also be read symbolically).  The aforementioned Chinese soldier puts up a noble—if hopeless—fight against the Japanese invaders with a few guerilla tactics that’d make Rambo proud.

But Yimou properly focuses on the impact of war on people rather than the carnage itself.  Bale, Ni Ni, Watabe, and Chen are excellent, and a subplot involving a prostitute scouring the debris for strings for her broken musical instrument puts a lump in the throat.  Still, the film’s two and a half hour middle section may wear on some viewers, and a great lot of the movie isn’t for queasy stomachs anyway.