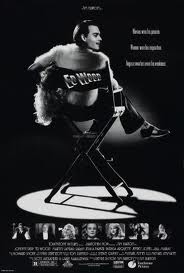 I happened to learn the tuition rates lately charged by some of our local colleges. Would you believe more than $100,000 a year? In ? Most graduates at this point probably won't even earn that much in their lifetimes. Add student-loan compound interest and you've got a recipe for a post-grad career major in Despair and a minor in Anger.

And it's especially piquant for the film students, those who, on top of merely paying for the privilege to attend some con-job learning institution, slave for production costs, film-festival entry fees, psychiatric counseling etc., working themselves into deeper and deeper holes trying to gain a foothold in a tough media industry overwhelmed with applicants. And all the while it stares them in the face, that even if they “make it,” most of them will never, ever be as renowned and as loved as the exceptionally bad filmmaker-tranvestite Ed Wood Jr.

Wood (1924-1978) did consistently inept creature-feature and crime flicks, infamous even before being rediscovered by fans with the advent of VHS home-video. If anyone outside the cult-louche culture still didn't know who Wood was by 1994, they sure got schooled by blockbuster director Tim Burton in his semi-confabulated biopic ED WOOD, shot in lustrous black-and-white like most of Wood's best-known turkeys themselves.

In the 1950s Wood (Johnny Depp) is an aspiring director-writer-actor-playwright, making one stupefying performing-arts venture after another with a small entourage of LA fringe people, most prominently once-great actor Bela Lugosi (Martin Landau in an Oscar-winning performance), now an aged addict unwanted by big studios. Wood gets to do GLEN OR GLENDA, an exploitation short feature on the hot topic of sex-change operations by `outing' his own secret perversion - a fetish for wearing women's clothing, sneaking them from his own live-in girlfriend (Sarah Jessica Parker).

Not even Lugosi's death stops Wood from including him in another project, the alien-zombie-invasion thriller PLAN 9 FROM OUTER SPACE. Drawing his bizarre regulars together, raising money unethically from church folks, resurrecting Lugosi via stock footage and body doubles, and emboldened by a chance meeting with Orson Welles, Wood completes what is destined to be treasured as the Worst Movie Ever.

A fine set of Ed Wood-oriented documentaries exist - even better than this movie, I'd have to say. LOOK BACK IN ANGORA, FLYING SAUCERS OVER HOLLYWOOD, and THE HAUNTED WORLD OF ED WOOD discuss the great (?) man's life, work and enduring fascination. Note, too, that they acknowledge his ultimate descent into alcoholism, poverty and sleazy sex films, something 's rather wishful portrayal doesn't delve into. ED WOOD is less a straight biography than glorified highlights and loving, nostalgic re-creations of Wood and his era, with some bits (meeting Orson Welles, a gala premiere of PLAN 9) that are history not as it was, but as Wood might have wished it had been.

And that's great - if you happen to be an Ed Wood fanatic and horror-trivia fiend. If not, this film's appeal is rather limited, though there is contagious joy in how Johnny Depp and others put across the giddy exuberance and teamwork of the filmmaking process - however misguided. Touching moments come from the mutually supportive relationship with the bottomed-out Lugosi, though some viewers (Bela Lugosi's family has made no secret of their opinion) feel that Wood may simply be exploiting a down-on-this-luck star. And viewers more accustomed to f/x-filled spectacles from Depp/Burton collaborations might want more fantasy, wilder visuals and action than the low-key stuff here. Few critics missed the irony that in determining to capture every possible nuance, every bad rubber octopus, of the Ed Wood universe, this movie's lavish budget skyrocketed to cost more than every real Ed Wood movie combined. And in the end ED WOOD became a rare Tim Burton movie that lost money at the box office (even though its place as an instant cult masterpiece was assured).

If you want to see something really weird, call up on YouTube (it’s a DVD extra too) the super-kinky "official music video" for ED WOOD, a burlesque-type dancer doing an undulating Vampira number (choreographed by Toni Basil) in a cemetery, done over the movie's instrumental theme. If you've got nothing better to do, join the Internet commentators arguing if that supremely limber, leggy girl in the video is Tim Burton's ex-muse, model-actress Lisa Marie, or some other distinguished specimen of womankind in the arts that none of you will ever date. Especially you broke, deep-in-debt film students.

As for me, I'm just astonished that Tim Burton actually nabbed the late Korla Pandit to portray himself in the wrap-party scene. Spotted the name discreetly hidden, low in the credits. I completely missed that detail the first time around. Korla Pandit…I am probably the only person in who even knows who Korla Pandit was. Except for one or two hip college-radio Djs hopefully saving up to move far away, where there might still be jobs and living income. (3 out of 4 stars)
Posted by Charles Cassady Jr. at 12:01 AM