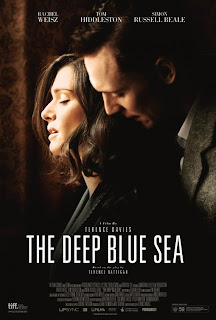 Based on a 1950's British play by Terrence Rattigan, THE DEEP BLUE SEA is the story of Hester (Rachael Weisz), a woman trapped between two lovers. Her husband Sir William (Simon Russell Beale) sincerely cares about her, but there is no passion in their relationship. Hester finds what her husband lacks in Freddie (Tom Hiddleston), a former air force pilot. But while sexual sparks fly between Hester and Freddy, their relationship is just as volatile outside the bedroom, mainly due to Freddy's inability to show Hester any real affection or even consideration.

Hester's solution to her dilemma is to attempt suicide, which is what she is doing when we first meet her. The attempt fails, and the film then bounces back and forth between past and present as Hester ponders what brought her to this point, and where she will go from there.


Weisz is very much the focus here, and she gives her all in the kind of complex female leading role that is all too rare in modern film. Hiddleston will no doubt be seen by millions more as Loki when THE AVENGERS opens next weekend, but as fine a comic book villain as he makes, its here that he shows just how good he really is as an actor. Beale has the least screen time of the members of this cinematic love triangle, but he nonetheless makes an indelible impression in the few scenes he has.

To be sure, some of the dialogue belies THE DEEP BLUE SEA's origins as a play, but given what passes for writing in most movies these days it's refreshing to see a film where what the characters have to say actually matters. Aside from that, director Terence Davies does a fine job of making sure his film never feels stage-bound. Cinematographer Florian Hoffmeister's soft, sepia toned photography adds to the visual interest, and the few carefully chose music tracks perfectly complement the onscreen action. 3 1/2 out of 4 stars.