Conspirators of Pleasure (April 13th and 14th at the Cleveland Cinematheque)

[CONSPIRATORS OF PLEASURE screens Friday April 13th at 7:30 pm and Saturday April 14th at 10:00 pm at the Cleveland Cinematheque.] 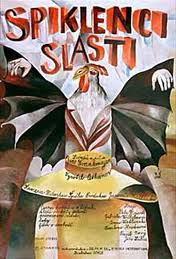 [WARNING: This more or less constitutes a belated Valentine's Day writeup/angry rant. And, as such, no good can come of it]

I don't know if you noticed, but Cleveland's most eminent "alternative newspaper" (really the only surviving one), the Scene, marks every Valentine's Day with a "Lust" issue. I suppose it's in the infamous tradition of the old Penthouse letters-to-the-editors section, not that I ever read Penthouse. I hardly read Scene. But anyway, every Valentine's now you can count on it printing Clevelanders discussing their kinkiest erotic experiences. I once said the "Lust" issue should be called it the annual `fiction edition,' and I double-dog dared editor Erich Burnett to print that joke. No, I TRIPLE-DOG DARED him to print that joke. He didn't, even whilst acknowledging the CHRISTMAS STORY rules that are hard and fast regarding triple-dog dares. 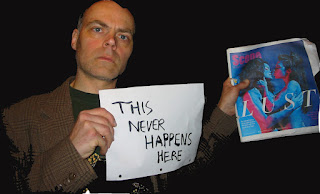 So I guess it should be with great vengeance and fu-rious anger that I comment on the 2012 "Lust" issue. Did you see this thing? Vivdly blue-saturated cover photo, depicted two gorgeous raven-haired women, seemingly topless, in a Sapphic embrace. Now, surely you've long noticed (if you're a nice, healthy individual maybe you haven't) how the alt-press in Cleveland is heavily back-loaded with sex ads. Back in the golden era of 976-phone numbers, it seemed to be about half the damn paper, and sometimes the movie section would be run dead last in the editorial matter, so my reviews and articles were juxtaposed with such stuff, 38-24-36 type beauties leaning toward the viewer in skimpy bikinis, tongues and other body parts spilling out. I could never figure if that increased or distracted my readership. But it always amused me how those bigger ads promising "local girls" had pictures of bikini-clad models posed against what I would take to be Santa Monica pier or the beaches of Malibu - part of the far west-side of Cuyahoga County I guess I had not visited. 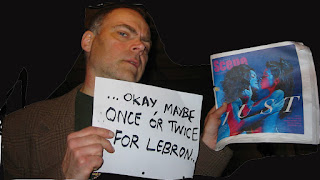 Anyway, this year's knee-weakening "Lust" cover not only gave full photographer-stylist credit, it even named the two lovelies. As if management knew that cynics like me would doubt that such nubile femininity existed among us here.

Well, okay, I won't say those two girls aren't real - just that I'll bet that when last seen they were under a tarp on a Conrail freight train heading out of town, Destination Anywhere, a handful of Scene modeling-fee money sewn into their thong undergarments, a stack of the `Lust' issue as their portfolio piece. I know that's what I'd do.

Either that or the girls are advanced replicants, of the "Standard Pleasure Model, Nexus Class," engineered in a secret co-venture between the Cleveland Clinic and the Tyrell Corporation. Isn't Tyrell a co-investor in that Medical Mart thing? So if Scene could rent them maybe the two are attainable to you dogfaces after all, as long as you've got the money, perhaps earned mining the Off-World Colonies, and can put up with them for the four-year lifespan. (Please, someone in the "comments" field, tell me you understand this paragraph. Even if you're lying.) 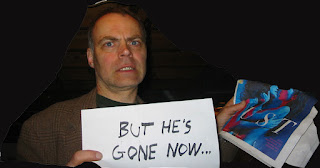 Such romantic thoughts bring me to CONSPIRATORS OF PLEASURE, a 1996 feature from Czech surrealist filmmaker Jan Svenkmajer. Svenkmajer is best known for his nightmarish stop-motion animation like FAUST, and this got tagged as his first live-action feature - and it is mostly live-action, though Svenkmajer insinuates a little little bit of stop motion.

Using not a word of dialogue, Svenkmajer presents a long, intricate visual joke about several sexual fetishists in some Prague-like city setting. Theirs are not nice, normal, everyday sex fetishes - you know, like women with breasts so large you can barely see the women attached to them; or Boy Scouts in Web chat rooms; or Tokyo schoolgirls being violated vaginally by giant tentacled monsters... I should explain that last fetish is one for our Japanese online readers specifically. Hi, Japanese! Ohayo gozaimase! You people aired a great episode last night of "Real Housewives of Kyoto (Getting Tentacle-Raped)."

Anyway, the nonverbal, interconnected ensemble of CONSPIRATORS OF PLEASURE range from a chic news anchorwoman to a shopkeeper, all of whom furtively pursue their own perversions in enigmatic fashion. Svenkmajer cross-cuts between their assorted activities - buying and rolling little balls out of bread, obtaining fabric and costumes, training live fish and building weird machines, all to the goal of getting some kind of orgasmic (or pseudo-orgasmic) ultimate thrill. A lot of the film amounts to a narrative puzzle; just what are these individuals DOING? And then we finally find out. There's a little intrigue and possibly even a murder before the end, but this is very much a darkly playful puzzle-piece about processes and weird desires.

I'm a bit surprised how much I liked CONSPIRATORS OF PLEASURE and its mordant Svenkmajer wit, given that the only production I can think of that remotely resembles it, the 2002 Hungarian feature HUKKLE (about eating and predatory consumption in all its forms in a lumpen little village) was an art-house hit that frankly didn't engage me remotely as much. Of course, nobody watching CONSPIRATORS OF PLEASURE should miss the big irony - or not - of the thing, that all these fetishists, even with some of them married to each other, pursue their intimacies alone. Totally alone. That's why it strikes me as the ideal Valentines Day movie. At least with the vibes around Cleveland, "Lust" issue fantasies notwithstanding.

And screening here on a Friday the 13th no less! The Cinematheque is showing CONSPIRATORS OF PLEASURE, as it always has in sporadic revivals, with the venue's own "adults only" rating [SPOILER ALERT]. This has nothing to do with the MPAA; it's strictly the management's own opinion that underaged kids shouldn't see this (they obviously haven't met the same creepy kids I have in my life). Yet the marvel of the movie is that there is no nudity, nothing like sex or eroticism As We Know It Captain. The "Austin Powers" PG-13 flicks are "dirtier" in that sense. Some University Circle students may think the Cinematheque is doing what so many other campus film series do (I speak from overpriced experience), showing hardcore porn as an end-of-the-semester treat. Well, those horndog jerks who think real life is like the AMERICAN PIE pictures are in for a considerable disappointment if they choose this one as a hot date-night choice. Don't tell them, of course. I want their dates ruined just like mine were. (3 out of 4 stars)
Posted by Charles Cassady Jr. at 12:01 AM