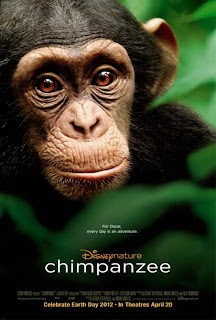 Because apparently I needed another reason not to go to the zoo with Tim Allen, Disneynature has made CHIMPANZEE, a beautifully shot, strikingly candid, and obnoxiously narrated film detailing the early life of a wild baby chimp, and the ongoing triumphs and struggles of his chimp kith. First, let me just the say that the footage captured by co-directors Alastair Fothergill and Mark Linfield (EARTH) is sensational – lush jungle, sky-rending thunderstorms, bee hives, ant herds, fungal marvels of bioluminescence, and, of course, a thrilling and deeply moving series of scenes revealing the sublime reality of a chimp’s everyday. But accompanying the tenderness, unforeseen violence, and the striking epiphany that, to nature, all of these twining miracles of triumph and tragedy are purely mundane, is an over-bearing voiceover that makes Bob Saget riffing on an overweight step-dad taking a Louisville Slugger to the Milk Duds sound like Ken Burns’ Baseball.

I fully recognize that this is a kids' movie. In fact, that’s specifically why Allen’s heavyweight ego and ham-and-egger jokes irritated me so much. Through concerted anthropomorphy and the gross imposition of human morality upon the blood-wet physics of instinct, the film cedes to a tragic, if familiar, notion: The more nature can be shown to mimic the choreographed banalities of civilization, the more interesting and entertaining it is. It's one thing when it's Porky Pig buttoning up his nautical frippery... But, for Gaia's sake, this is a documentary.

Let’s back up: CHIMPANZEE tells the story of an infant chimpanzee and his life among a group of chimps that live in a fertile nut grove. While our fledgling simian learns to crack nuts, pick figs, and build tree nests, we discover that a large group of rival chimps has been eyeing their Edenic nutscape. Cue another classic Disney matricide as the band of interlopers attack. In the wake of the ambush, we follow our orphaned chimplet into a miraculous relationship that allows him to survive.

This is all fantastic. And the visuals, which are edited tightly enough to stand on their own, wrap little ape hands around your heart and tug like they’re nabbing a fig. But, of course, as viewed from the sound booth, the jungle clan can’t just be anonymous, wild chimps, eking out a hard-scrabble existence amid the howling beauty and stoic violence of nature – They’re little Oscar, and silverback Freddy, and Grandpa, who Allen chides for having bad “table manners.” When they’re about to crack nuts with rocks, Allen, before coughing out a series of his Home Improvement catch-grunts, observes that it’s time for power tools. And the rival group of chimps… yeah, the leader is named Scar. His compatriots? “Thugs!”

It’s this last cloying absurdity that really rattled my cattle. Aren’t all chimps fascinating enough just by virtue of their intelligence, their dexterity, and the unselfconscious emotional honesty that makes them capable of both gentle affection and ferocious brutality? Must they also be heroes and villains – white and black hats – their complex lives hardboiled down to hackneyed melodrama? Worse, the film flat-out ignores the equally meaningful lives of the unsuspecting colobus monkeys and army ants that the chimps voraciously devour. I guess they were bad guys too? Hell, they play up the treachery of Scar’s droogs to such an evil singularity, I started to think, “hey, where’s a poacher when you need one?”

People – kids especially – will automatically anthropomorphize animals. And when done to a healthy extent, anthropomorphization's a good thing; it allows us to understand and, hopefully, respect the intractable bond we share with the still-wild beasts of earth, to marvel at the coiled impulses and rich reptilian potential we still harbor in the living dark beneath hidden trapdoors omitted from the blueprints of our idealogical foundations. But when congealed into manufactured empathy, into hollow multiplex fictions that reduce the earth’s sacred chaos to mass-produced imaginings of good and evil - imaginings that, sure, work great for us because we want higher thread counts, better mileage, a cooler ranch, a nacho cheeser - it defies what makes nature beautiful in the first place: Its unwillingness to conform to the fictions of civilized life. It’s this magnificent, tranquil, greasy, screeching, ripped-open honesty that CHIMPANZEE’s narration betrays.


20 cents from every CHIMPANZEE ticket does go to the Jane Goodall Institute’s efforts to preserve wild chimps, so if you’re passionate about animals (and have a sturdy pair of earmuffs), don’t let the bitter ramblings of a hack Internet writer stop you from enjoying Fothergill's and Linfield's fantastic footage. (2 out of 4 stars)
Posted by Matt Finley at 12:01 AM