All In: The Poker Movie (April 6th and 7th at the Cleveland Museum of Art)

[ALL IN: THE POKER MOVIE screens Friday April 6th at 7:00 pm and Saturday April 7th at 1:30 pm at the Cleveland Museum of Art.]
Review by Bob Ignizio 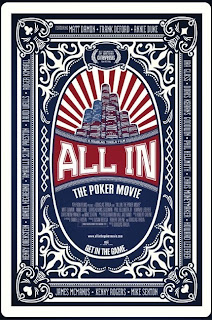 Poker has seen its fortunes rise and fall many times over the years, but the last decade or so have been particularly successful years for the venerable card game. And while it does spend a small amount of time giving the history of the game, it's really these more recent times that ALL IN: THE POKER MOVIE focuses on. After a cursory explanation of how the game started and first rose to widespread popularity thanks to soldiers returning from World War II, ALL IN sets about detailing how poker went from the stuff of friendly weekend games between regular folks to a major sporting event that airs on multiple television networks every day of the year that has its own crop of superstars.
Interestingly enough, it appears that a movie played a major role in poker's recent renaissance. Although it was a box office bomb when released in 1998, ROUNDERS nonetheless exerted a powerful influence. I guess you could say it's kind of the Velvet Underground of sports movies; not very many people saw it, but those who did wanted to play poker. And with the rise of the internet around the same time, increasingly those who wanted to play were doing so online. All of which was perfectly legal, at least for a time.


ALL IN tells this story using the time honored “talking heads” documentary approach, interviewing gamblers, reporters, and relevant celebrities for their opinions and recollections on poker's most recent rise and fall. What's missing are any kind of interviews with people in the government who were responsible for the crackdown on online gambling. Maybe no one on that side of the issue wanted to talk, I don't know, but it feels like a crucial piece of the story is missing. Still, overall this is an enjoyable and informative film about the reasons poker has become so popular in recent years, and as long as you don't expect more than that, it's worth a watch. 2 1/2 out of 4 stars.
Posted by Bob Ignizio at 12:01 AM