15 Hour 'Story of Film: An Odyssey' Coming to Cleveland Museum of Art

[Press Release from the Cleveland Museum of Art.]


THE STORY OF FILM: AN ODYSSEY 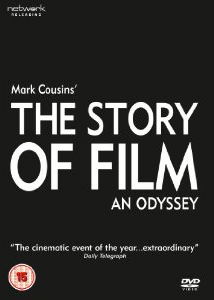 Inspired by his book of the same title, Mark Cousins’ 15-part, 15-hour history of the cinema spans the silent era to the digital age. The series is unique in several ways. First, it is a history of an art form, not an industry, and focuses on the creative individuals and innovators who have molded and advanced motion pictures over the past 100+ years. Secondly, it is global in its perspective, with ample screen time devoted to non-Western cinema in addition to that of America and Europe. Thirdly, it is the work of one man, Mark Cousins, a Northern Irish writer, critic, and director now based in Scotland. Cousins spent six years on his DIY epic—traversing the globe, interviewing directors, selecting film clips, and writing narration. The result is not only wide-ranging and erudite, but suffused with a love of movies. “A semester-long film studies survey course compressed into 15 brisk, sometimes contentious hours.” –The N.Y. Times. Cleveland premiere. (UK, 2011, color/b&w, subtitles, video, 915 min.)


May 2, 6:45
Episode 1 (1895-1918)
The birth of the cinema and the introduction of the thesis that ideas and passion have always driven movies more than money and marketing.
Episode 2 (1918-1928): The Triumph of American Film and the First of Its Rebels
Hollywood during the Roaring Twenties: glitz, fantasy, Charlie Chaplin, Buster Keaton. Robert Flaherty, Eric Von Stroheim and Carl Theodor Dreyer battle for the soul of the new medium with movies that are serious and mature. Total 122 min.

May 9, 6:45
Episode 3 (1918-1932): The Great Rebel Filmmakers Around the World
The silent era proves a golden age of world cinema: German Expressionism, Soviet montage, French impressionism and surrealism, the glories of China and Japan.
Episode 4 (the 1930s): The Great American Movie Genres and the Brilliance of European Film
The arrival of sound and the birth of new types of movies: screwball comedies, gangster pictures, horror films, musicals. Howard Hawks, Alfred Hitchcock, and moody Frenchmen. Total 122 min.

June 6, 6:45
Episode 11 (the 1970s and onwards): Innovation in Popular Culture Around the World
The arrival of the multiplex: Star Wars, Jaws, et al. Bollywood blooms and Bruce Lee kick-starts a new kind of kinetic cinema.
Episode 12 (the 1980s): Moviemaking and Protest Around the World
Bold filmmakers speak truth to power in protest movies in America, the Soviet Union, and pre-Tiananmen China. Krzysztof Kieslowski emerges in Poland. Total 122 min.

June 20, 6:45
Episode 15 (2000 onwards): Film Moves Full Circle and the Future of the Movies
Movies get serious after 9/11. Romanian cinema, David Lynch, Alexander Sokurov, and Christopher Nolan continue to break new ground as the art of cinema looks toward the future. 61 min.
Posted by Bob Ignizio at 12:01 AM