[WE NEED TO TALK ABOUT KEVIN opens in Cleveland on Friday March 30th exclusively at the Cedar Lee and Capitol Theatres.]
Review by Pamela Zoslov 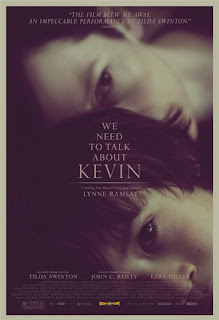 The terrible shootings at Chardon High School on February 27 delayed Cleveland Cinemas' local opening of WE NEED TO TALK ABOUT KEVIN, a drama centering on a boy who commits mass murder at his high school. Viewing the film in the aftermath of that incident does give us the opportunity to think about how different fiction is from real life. It also makes us think about how different literature is from movies.
Based on a novel by Lionel Schriver (the masculine nom de plume of a woman journalist and author), WE NEED TO TALK ABOUT KEVIN imagines the school shooter as a monster, a “bad seed” who was born that way. Even as a baby, Kevin is stubborn, screaming all day and driving his mother (the fine actress Tilda Swinton) to distraction, while his father, Franklin (John C. Reilly) remains happily oblivious.
As a tot (Jasper Newell), Kevin is slow to talk – not because there's anything wrong with him (according to the pediatrician), but out of sheer stubbornness. He develops his own, mimicking language that he uses instead: Nyah nyah nyah nyah. And, most maddeningly, he refuses to submit to toilet training, insisting on wearing a diaper and flaunting his feces even when old enough to count to 100. At one point, exasperated by having to change this hellion's diaper yet again, she throws him against a wall, breaking his arm – “the only honest thing you ever did” the older Kevin (Ezra Miller) reflects when his mother visits him in prison. It's obvious from the moment Kevin appears that he's a calamity waiting to happen, and his sociopathic deeds become more serious as he gets older.
In real life, the narrative is seldom so clear. The young perpetrator of a school shooting could be the friendly, normal-seeming boy who, for reasons not well understood, decided to bring a gun to school that day to avenge some private hurt. Often there is trouble in the family; with the possible exception of the Columbine killers, school shooters aren't usually the strangely demonic hellspawn of stable, well-adjusted parents. WE NEED TO TALK ABOUT KEVIN is less a social drama about school shootings than it is a horror movie. Kevin is the demon seed, he's Rosemary's baby, he's Damien – a monster born to well-educated, affluent parents who did everything right and just happened to lose the DNA lottery. (Eva and Franklin's next-born child, a girl, is the picture of sweet normality.)
Schriver's novel is narrated by Eva Khatchadourian, the mother of the boy, in the aftermath of the school shooting that killed seven of Kevin's classmates. Her life is in pieces – a successful travel writer, she's living in a squalid house and reduced to taking any job she can get, which at present is clerking at a depressing travel agency. The novel consists of a series of letters Eva writes to her estranged husband, and is distinguished by Eva's voice – highly educated, at times lofty. In the letters, Eva searches for the origins of Kevin's crime, examining her own ambivalence about motherhood (which the author admits mirror her own) and the events of his childhood. She comments on the contrast between European and American culture and reflects on her traveling days.
That authorial voice and introspection are missing in Lynne Ramsay's stylish but hollow film, which requires us to imagine what Eva must be thinking and substitutes long, lingering camera shots and ironic rockabilly songs for meaning. Like Eva's peripatetic career, Ramsay's style is all over the map: fetishistic close-ups of minor grotesqueries, like Kevin's mouth as he chews and draws fingernail parings from his lips; vertiginous, rain-drenched flashbacks of Eva and Franklin's courtship in Europe that look like Nicholas Roeg's DON'T LOOK NOW; a deadpan-absurd office setting that summons memories of '80s indie films. The prelude to this arty fantasia is the opening scene, in which Eva is held aloft by a crowd that immerses her in tomato sauce. A symbolic dream? A recollection from her travel days? We don't know, but don't it look cool.
Other details in the story, drawn from the novel, ring false. For example, Eva, who continues to live in the same town where the incident occurred, is attacked constantly by angry townsfolk: kids go all Sherwin Williams on her, covering her house and car with red paint. A woman stops on the street to slap her face and say “I hope you rot in hell, you fucking bitch.” Another woman smashes the eggs in her cart at the supermarket (Eva pays for them anyway). It seems to me that human nature is somewhat different than this. Eva lost loved ones to her son's crime spree as well, and parents tend not to blame (let alone violently attack) the parents of kids who kill, recognizing that they are victims as well. Another improbability: Kevin, who develops a fascination with archery after his mother reads him Robin Hood stories, uses a longbow to commit his massacre – interesting visually, but not a plausible instrument of mass destruction.
Although I have read only excerpts of the book, it's clear that the film misses much of its subtlety and complexity, as well as some crucial twists. The acting, however, is quite good, particularly Miller, who brings a sly, sardonic quality to teenage Kevin. Swinton, though always interesting, is underused as the passive, taciturn Eva. Reilly, too, has very little to do.
As far as providing insight into what causes a teenager to commit mass murder, the film has little to say, aside from Kevin's glib speech about how people's lives are so boring they want to see “people like me” on the 6 o'clock news. Two and a half stars.
Posted by Pamela Zoslov at 12:01 AM