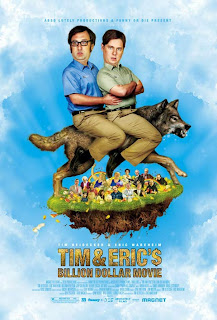 Like a party guest who overstays his welcome, the feature length efforts of even the most venerable sketch teams often leave their audiences sighing and squirming with bored, seat-shifting impatience. Look at TENACIOUS D IN THE PICK OF DESTINY, or BRAIN CANDY. It's easy for short-form brilliance to give way to repetition and grueling, mechanical allegiance to a superfluous plot. TIM & ERIC’S BILLION DOLLAR MOVIE neither breaks the trend nor serves as its most painful example. Anyone who has enjoyed the world established by the duo in Tim and Eric Awesome Show Great Job - an absurd public access hellscape of obsolete technology where infomercials and corporate training VHS tapes are the highest art form, and "awkward" is the watchword - will find plenty of amusement in the pair's first feature film (though almost certainly not 94-minutes worth). This also means, however, that for those who are ambivalent to - or flat-out annoyed by - their manic inanity (me, for example), the movie offers little but the consolatory assurance that artists with singular, iconoclastic visions can still find mass cultural outlets for original and uncompromising work - unpalatable as that work might seem.


The film begins as Tim Heidecker and Eric Wareheim, playing themselves, screen their completed debut feature to investors at The Schlaaang Corporation, who quickly realize they've sunk a billion dollars into a 3-minute-long disaster starring a Johnny Depp look-alike and a jacket made of diamonds. Now on the lam and a billion in hock to the temperamental Tommy Schlaaang (Robert Loggia), Tim and Eric see a commercial for the dilapidated S'Wallow Valley Mall in which owner Damien Weebs (Will Ferrell) promises a billion dollars to anyone willing to manage his wilting consumerless dystopia. Wackiness ensues as the pair finds the mall populated by a variety of weirdos and wastrels, including the ailing man-child Taquito (John C. Riley), a new age healer (Ray Wise) trafficking in a mysterious substance called "Shrim," and Katie (Twink Caplan), a balloon stand proprietor for whose sexual attentions the protagonists vie.
Though the narrative arc may be wider than anything the duo has attempted before, the scope of the humor falls firmly within their usual niche of silly video editing gags, surrealist mini-sketches, over-pathos'd songs, and scatological gross-outs, complemented by yards of pasty, pudgy flesh as Tim and Eric disrobe. Repeatedly. Still, I don't mean to entirely discount the comedians' aggressively warped aesthetic. They excel at tapping into the awkward earnestness and unself-conscious ineptitude of amateur television and video, and some of the film's more self-contained moments, like the act-separating, fourth wall-breaking "Understanding Your Movie," are legitimately funny.
I do find it baffling that Wareheim's and Heidecker's comedy seems to be so brutally love-it-or-loathe-it divisive. I’m not personally a fan, but I can't conceive of hating it. Sure - it's frustrating trying to criticize something that purposefully invokes some of contemporary culture's most awkward and unwatchable media. I mean, calling it “unwatchable” is almost the highest compliment you could pay. But Tim and Eric conduct the ridiculousness with such unrestrained enthusiasm and creativity, the harshest insult I can hurl is that it simply isn't my bag.
By the same token, though TIM & ERIC’S BILLION DOLLAR MOVIE delves deeper into the realm of abstract comedy and violent and sexual non-sequitors than most comedic multiplex fare., and to herald this assertive difference as concerted genius seems a wild flying leap. Granted - as a response to America's constant cultural obsession with ideals of beauty, convenience and ease, Tim and Eric's affection for the limitations of low-tech media and embrace of homely, well-intentioned misfits is legitimately and refreshingly rebellious. Taken as an isolated statement, or a self-sustaining narrative driven sheerly by its own insular sense of humor, however, it's frustratingly vacuous and irritating. 2 out of 4 Stars.
Posted by Matt Finley at 12:01 AM