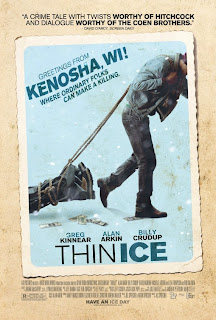 Ethically challenged insurance salesman Mickey Prohaska (Greg Kinnear) is looking for that one easy score that will enable him to put his shambles of a life back together in THIN ICE, the new quirky crime film/light comedy directed by Jill Sprechler and co-written with her sister Karen. When Mickey hires a new salesman, the optimistic to the point of naivete Bob Egan (David Harbour), to bring in new business, it looks like just such a score has been dropped in his lap in the form of the senile Gorvy Hauer (Alan Arkin). Gorvy is a nightmare of a customer, but he also happens to possess an extremely valuable violin which he thinks is junk. It seems a simple matter for Mickey to get the old man to part with the instrument, but it turns out to be anything but.


With its Midwestern America in winter setting, clueless characters, and botched crimes, it's hard not to see similarities to the Coen Brothers' FARGO, at least at first. As the film goes on, however, it begins to have more in common with films like HOUSE OF GAMES, THE USUAL SUSPECTS, and any number of films noir back through the ages.
There are two big twists in THIN ICE, both of which are surprising if a little contrived. In fact most of the plot feels very deliberately constructed more than something that flows naturally. But if the plot is at times clunky, that's more than made up for by a great cast getting to play fun, multi-layered characters. This is the kind of indie film that has the capacity to reach beyond the art house crowd to audiences who are simply tired of $100 million drive-in movies and are just looking for something smart and adult to watch for a change. Well, here it is folks. Go out and support it, even with the caveat I'm about to give you. 3 out of 4 stars.
Addendum – I was kind of bummed to learn the story behind THIN ICE. It started out as a film called THE CONVINCER that did well on the festival circuit. When it was picked up by its present distributor, they had the film re-edited, re-scored, and re-titled without the input of the filmmakers. There's some dispute about whether or not Jill Sprechler was given a chance to participate in making the changes. Ultimately, though, the distributor can do what they want with a movie once they've bought it, provided there's nothing in the contract that says they can't. It's certainly nothing new in the film business – just read up on Orson Welles if you don't believe me. Hey, for all I know the changes may have improved the movie - it happens on occasion, as was the case with CINEMA PARADISO. Still, I think it bears mentioning since the Sprechler's were not allowed to have their names taken off of the credits, nor are they even allowed to discuss the changes. Just goes to show that the world of indie film can be every bit as cutthroat and disrespectful to filmmakers as mainstream Hollywood.
Posted by Bob Ignizio at 12:01 AM