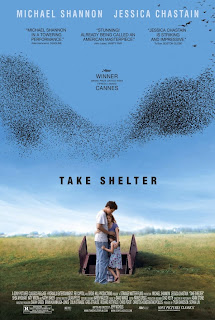 I first became aware of the excellent actor Michael Shannon in BUG, that was doomed by a misleading market campaign that made it appear to be a straight forward horror film instead of the psychological drama with horror elements that it was. TAKE SHELTER could almost be a companion piece to that film. It's quieter and more grounded in reality, but once again Shannon plays a man whose sanity is in question, and while by no means a horror film it does use some techniques of the genre.
Curtis (Shannon) is a hard-working regular guy who is either beginning to experience the onset of schizophrenia, an affliction that runs in his family, or having psychic flashes of a grim future where friends, neighbors and trusted pets attack like they're in a zombie movie and a storm rains brown water. Curtis recognizes that he may have an illness, but he has a hard time reaching out for help. Eventually he does see a psychiatrist, but to hedge his bets he begins taking precautions to protect his family – wife Samatha (Jessica Chastain) and hearing-impaired daughter Hannah (Tova Stewart). While caging up the lovable family dog and enlarging his backyard storm shelter seem reasonable actions to Curits, to everyone else he seems a little bit crazy. But what if he's right?
In order to talk about this film in any meaningful way, I may have to cross over into spoiler territory a little bit. I'll try to avoid that as much as possible, but if you haven't seen TAKE SHELTER yet, you might want to stop reading.
This isn't some gimmicky twist movie where the whole point is to keep the audience confused about what's really happening. Rather, it's a carefully drawn portrait of a man trying to deal with a terrifying personal experience that he doesn't fully understand. The film does a fine job at conveying Curtis' uncertainty, both in Shannon's performance and director Jeff Nichol's visuals, but by the end I think the it's pretty clear what's really happening. That's not to say you absolutely can't read it either way, but personally I thought Nichols played fair throughout and gave a definitive answer, one that we slowly and naturally come to see.
Most of the confusion some viewers have experienced with TAKE SHELTER stems from its ending. If you're the kind of person who takes movies strictly at face value, then TAKE SHELTER is an okay psychological horror film that has a fake-out ending where you think everything is one way only to suddenly have the rug pulled out from under you. If you read movies more on a subtextual, symbolic level, then it's a profoundly moving drama about a family coming together to deal with one member's mental illness, with the full realization that it's going to be a rough road with no guarantees.
Regardless of which side you come down on, it's hard to deny Shannon's incredible performance. Jessica Chastain is outstanding as well, giving what I'd say is her best of the 5 or 6 performances she gave in 2011, all of which were better than the one she actually got nominated for. As for writer/director Nichols, he's fast becoming one of my new favorite filmmakers. This is his second film, his first being the equally subtle and complex SHOTGUN STORIES, also starring Shannon. Of possible interest to Cleveland Movie Blog readers is the fact that TAKE SHELTER was filmed in the Ohio towns of Elyria, Grafton and Lagrange. 3 1/2 out of 4 stars.
Posted by Bob Ignizio at 12:01 AM