[SING YOUR SONG screens Friday March 16th at 7 pm and Sunday March 18th at 1:30 pm at the Cleveland Museum of Art.]
Review by Pamela Zoslov 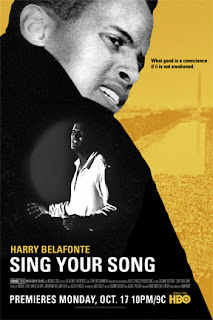 When I was growing up in the '60s, the tan, handsome face of Harry Belafonte beckoned from record covers in everyone's parents' record collections. Though it might be hard to explain to young people now why this smooth singer of Caribbean folk songs had such mad appeal, Belafonte was a superstar -- and a “safe” black idol for white suburban housewives to fancy. He was also a hell of a singer. (Listen to him sing the spiritual “Take My Mother Home” – it will give you shivers.)
But, as detailed in the new documentary SING YOUR SONG, Belafonte was considered anything but “safe” by J. Edgar Hoover's FBI. Belafonte, who recently turned 85, was – and still is – a prominent political activist, and the Bureau spied on him for years.

One of the film's more tantalizing revelations is that in the 1950s, burdened by the pressures of fame and financial success, Belafonte entered psychotherapy with a Columbia University professor named Janet Alterman Kennedy. After pressing Belafonte for information about his association with the singer and government-persecuted dissident Paul Robeson, Kennedy persuaded Belafonte to hire as a manager her husband, Jay Kennedy. Years later, it was discovered that “Jay Kennedy” was really an FBI informant named Samuel R. Solomonick, who was reporting that Belafonte, along with his friend Martin Luther King Jr., was an agent of the Communist Peking government. (Solomonick also claimed, amusingly, that while Belafonte was popular, he was “generally disliked by the Negro people.”) That's how it was in America in the Red-menace 1950s.
The documentary, directed by Susanne Rostock and produced by Belafonte's daughter, Gina, tells the story of Belafonte's career as a singer and actor, but places special emphasis on his tireless work in the Civil Rights movement and on behalf of social justice causes around the world, ranging from combating poverty in Africa, protesting apartheid in South Africa and assembling, in his old age, a “meeting of the elders” to defeat inner-city youth gang violence.
Belafonte, who narrates much of his own experience, emerges as a thoughtful, principled man of uncompromising character. Belafonte experienced racism on many fronts – restricted hotels in the South when he was touring with an interracially cast revue, on his popular TV appearances, when he committed the unpardonable offense of holding the hand of a white woman, in films where even an implied love affair between his character and a white actress' was too much. And he battled back unflinchingly, by producing and acting in his own films, ending a popular television show rather than change its multicultural content, working closely with Dr. King, enlisting his famous friends to participate, sometimes at great risk, in the civil rights marches. He consistently refused to “make nice” with political leaders, declining President Clinton's invitation, for example, to be part of the U.S. delegation to South Africa for the presidential inauguration of Belafonte's friend Nelson Mandela, in protest of U.S. policy in Haiti. He spoke out forcefully against the Bush Administration's invasion of Iraq.
For all its exhaustive detail about Belafonte's admirable human rights works, the documentary's most interesting section is about Belafonte's musical origins and career. With a dazzling collection of archival footage and music, the film recounts Belafonte's life, from his birth in 1927 in Harlem, the oldest son of Caribbean immigrants. After his parents' divorce, he went lived for a time with relatives in his mother's native Jamaica and witnessed firsthand the oppression of the people by British authorities, an experience that affected him deeply.
He returned to New York, dropped out of high school, served in the Navy and, after working odd jobs, attended a performance of the American Negro Theater that changed his life. He studied drama with fellow students Marlon Brando and Walter Matthau, and while singing for a class project was offered a gig singing at a jazz club called the Royal Roost, backed by musicians including Charlie Parker and Miles Davis. He became a popular act and landed a recording deal. Then he discovered folk music through a singer named Huddie Ledbetter – better known as Lead Belly. The power of folk music, Belafonte recalls, was galvanizing. “It was magical for me.”
He scoured the Library of Congress for archival folk songs and sang traditional folk music at the Village Vanguard. He also mined his heritage and popularized “Calypso” songs, with his first breakthrough hit and signature song, “Matilda” and a million-selling album, Calypso, featuring the now-familiar “Banana Boat Song” (“Day-O”). Though typecast as the “King of Calypso,” Belafonte's musical tastes were eclectic, encompassing show tunes, blues, ballads and “Hava Nagila.” Later travels to Africa introduced the music of that continent into his repertoire; he recorded with South African singer Miriam Makeba, introducing her to a wider audience.
Alongside his musical career, Belafonte received considerable acclaim for his film acting, starting with a star-making role in Carmen Jones (in which, oddly, his singing voice was dubbed by an opera singer). He became increasingly absorbed in political activism, a preoccupation that contributed to the ending of his first two marriages and left his children feeling neglected. One of his daughters recalls feeling angry as a young child that her dad was “inside” the TV but that she couldn't touch him.
The film has a tendency to toggle back and forth confusingly in its chronology, and in the second half becomes a rather repetitive litany of Belafonte's peripatetic humanitarian work and his thoughts – at times a tad self-aggrandizing -- about it. It is, however, a worthy tribute to a talented and exceptional man who has used the power of his celebrity to speak out against injustice and promote real change in the world. 3 1/2 out of 4 stars.
Posted by Pamela Zoslov at 12:01 AM