[SATCHURATED will be available on home video April 10th) 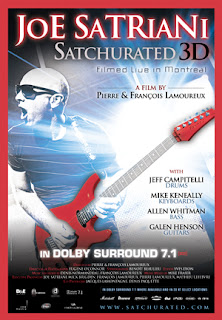 Joe Satriani can drop jaws with breakneck 32nd note runs up and down the scale of his custom Ibanez guitars.  But he can also bruise hearts with a single, well-timed, sweet-toned string bend.  There was a lot of both going on last Thursday night when his new 3D concert film SATCHURATED premiered in at The Capitol Theater.
Known as “Satch” in guitar circles, the shred guru released was signed to Relativity Records in 1986 on the strength of his self-financed, all-instrumental EP.  His first full-length, Not of This Earth, was a sensational collection of futuristic-sounding rock songs powered by Joe’s technical flash and fret board fluidity.  But it wasn’t until former student (and Zappa alumnus) Steve Vai found fame with David Lee Roth that Satriani’s star truly ascended.  The flamboyant Italian stunt guitarist (who appeared as Jack Butler in the movie Crossroads) was grateful for his newfound success and wouldn’t stop gushing about the Berkeley-based instructor who got him started.   Consequently, Joe already enjoyed a mythical, Yoda-like status among metal-heads even before the release of his seminal sophomore album.