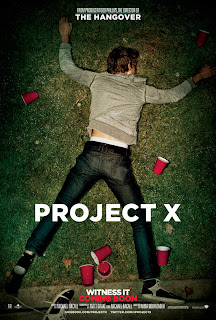 I've been a parent for a little over a year now, but PROJECT X is the first movie I've seen in that time to really make me feel like it. Of course even without being a dad, at 41 I'm way too old to fairly assess a movie like this for its target audience. When I was an adolescent/teenager, I certainly didn't care what old fuddy duddies like Siskel & Ebert had to say about the teen sex comedies inundating screens in the early eighties, just as they probably didn't pay any mind when they were young to the establishment critics of the fifties and sixties when the new Roger Corman flick was playing at their local drive-in.
Now I could say the big difference between the so much better movies I enjoyed as a teen and PROJECT X is that the films of my era showed some restraint, had reasonably well developed and engaging characters, and generally had some kind of positive moral message. I suppose that's true, but I didn't watch PORKYS for its subplot about racial tolerance (honest, it's in there), and I didn't watch FAST TIMES AT RIDGEMONT HIGH for its cautionary warnings about the consequences of teen sex. I watched those movies because they had naked boobs. Well, mainly for the naked boobs, but I also enjoyed the gratuitous profanity, belching, farting, and puking. What do you expect from a 12 year old boy?
The producers of PROJECT X are betting that the adolescents, teens and young adults of today haven't changed that much since my time, which is probably a safe bet. With that in mind, they've taken the teen sex comedy formula and stripped down it to its bare essentials. You know that one scene in every movie of this kind where the kids have a really wild party? Girls get naked, alcohol and drugs are consumed to excess, property gets destroyed, etc? Now imagine that's the entire movie, and that it was shot with a cheap hand-held video camera like such recent “found footage” movies as the PARANORMAL ACTIVITY series or CHRONICLE.
I could list all the things in this movie that I felt went to far, but what would be the point? Times have changed, and I realize that kids today can see things with a click of a mouse that go far beyond anything in the skin mags and dirty books I had to sneak into the house as a kid. Any movie seeking to depict the world teens inhabit today has to reflect that if it's being honest at all, and I don't fault the movie for it. That doesn't mean that every single character needs to be completely devoid of likeability or basic human decency, though.
Certainly SUPERBAD proved that a modern teen sex comedy could up the ante in terms of vulgarity while still maintaining some kind of moral compass and displaying actual filmmaking skill, but the lesson seems to have been ignored by the makers of PROJECT X. The other thing SUPERBAD had that is absent here is laughs, and at the end of the day that's the one thing that can't be forgiven. Oh, there's a few chuckles here and there to be sure, but for the most part I just sat silently in my seat feeling numbed by the onslaught of profanity and idiotic behavior. This movie isn't edgy and irreverent; it's just moronic, mean spirited and crass.
Ah, but what do I know? There was a whole row of teenagers seated behind me at the screening I attended, and they seemed perfectly happy with what they were watching. When I was their age, I didn't see the distinction between worthless trash like HARDBODIES or JOYSTICKS and something that was genuinely good like FAST TIMES, either, so I can't say I was any more discerning. I know better now, of course, and I imagine (or hope) that these kids will eventually grow up to realize what a steaming pile of crap this movie is. Those presently in the 12 to 22 year old age bracket aren't going to care what I say anyway, though, and anyone older probably isn't going to bother wasting their time and money. So really, this review is just an excuse for me to vent. (1 out of 4 stars)
Posted by Bob Ignizio at 12:01 AM