Norwegian Wood (March 8th and 9th at the Cleveland Cinematheque) 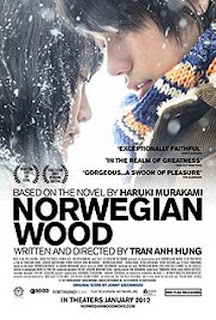 The sixties wasn't just a wild and crazy time here in America; almost anywhere you went in the world, you could find social unrest as the youth culture pushed back against the old guard on nearly every front, be it social, political, or artistic. Japan was no exception, but for Watanabe (Ken'ichi Matsuyama), a college student living in Tokyo circa 1967, none of that matters much. Emotionally devastated by the suicide of his best friend Kizuki (Kengo Kora), Watanabe has withdrawn into himself, the events of his era merely flowing around him.
The suicide affects Naoko (Rinko Kikuchi) even more profoundly. All three young people had been close friends, but Naoko had known Kizuki since they both were three years old. It's not explicitly stated at this point that Naoko and Kizuki were boyfriend and girlfriend, but it's strongly implied.


When Naoko shows up in Tokyo, she and Watanabe resume their friendship, never speaking directly about their deceased friend. On Naoko's 20th birthday, things move well beyond friendship for the two. However Watanabe makes the mistake of asking an extremely sensitive question as the two consumate their relationship, leading to an extremely uncomfortable night. In the morning, Naoko is gone.
After writing Naoko proclaiming his love for her and getting no immediate response, Watanabe returns to his mostly solitary existence, occasionally heading out with his friend Nagasawa (Tetsuji Tamayama). to pick up girls for empty sex. Two major events then happen in rapid succession, each of which promises to send Watanabe's life in a new direction. First he meets Midori (Kiko Mizuhara), the daughter of a bookseller who calls Watanabe on his self pity but has some odd notions about love. Second, a letter finally arrives from Naoko telling Watanabe that she has her herself committed to an asylum. She leaves open the possibility for romance, but says she isn't mentally ready yet.
All of these characters have issues with the past, and aside from the question of who, if either, of the women Watanabe will end up with is the question of whether any of them can escape the lasting impact of the tragedies which haunt them. Vietnamese director Tran Anh Hung (SCENT OF GREEN PAPAYA, CYCLO) accentuates the sense of morbidity hanging around these characters with slow, deliberate pacing and by shooting many scenes in almost monochromatic cold grays and blues. The entire film is infused with a sense of melancholy, although its not completely without hope or humor.
This was adapted from the Japanese novel of the same name, and I get the feeling certain aspects of the plot are more fully fleshed out in the book (I haven't read it, so I can't say for sure). In particular, Watanabe's friendship with Nagasawa and his girlfriend Hatsumi (Eriko Hatsune) feels almost like an afterthought in the film, and Naoko's roommate Reiko (Reika Kirishima) could have stood to have a little more attention given to her character. Regardless, the film gets its themes across well and is a largely satisfying, if somber, viewing experience. 3 out of 4 stars.
Posted by Bob Ignizio at 12:01 AM