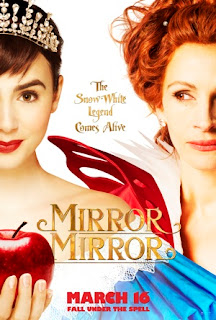 Julia Roberts' evil queen tells the audience at the start of MIRROR, MIRROR that this is her story. The novel and Broadway musical Wicked utilized just such a shift in perspective to retell the familiar story of The Wizard of Oz to much success, and one can certainly see the potential in the venerable Brother's Grimm fable of Snow White and the Seven Dwarfs for a similar approach. It's a shame, then, when MIRROR, MIRROR quickly abandons that conceit to focus on Snow White (Lily Collins) instead.
The basic set-up for the story is familiar to anyone who has seen the Disney animated film version or read the fairy tale. The Queen is obsessed with remaining the “fairest of them all”, but fears that her stepdaughter Snow is already close to usurping that mantle. From this expected starting point, the film proceeds to put a post-modern spin on the tried and true material: the Prince (Armie Hammer) is hapless and self absorbed and Snow is by no means a damsel in distress in need of rescue. The Seven Dwarfs (Jordan Prentice, Mark Povinelli, Joe Gnoffo, Danny Woodburn, Sebastian Saraceno, Martin Klebba, and Ronald Lee Clark) are not miners as in the Disney adaptation but rather a band of thieves. The Dwarfs have appeared this way in some versions of the fairy tale, but the gadgets they use to compensate for their short stature are I believe unique to the film.


As much as the movie deconstructs its source, though, it ultimately cops out instead of going all the way. There are some good scenes of The Queen worrying about losing her power and subjecting herself to excruciating beauty treatments in a vain effort to compete with Snow that touch on ideas of how women are valued based on appearance, and one senses we're supposed to empathize with the character in these moments. But given the Queen's actions in the film and Roberts' portrayal, which rather than aiming for either full-on villain or sympathetic victim winds up closer to shallow sitcom mean-girl, it just doesn't work.
As for Snow, she may be a more physically capable heroine than we're used to, but Collins' performance is too bland to fully sell that notion. Of the leads, only Hammer comes through with any real charisma. The supporting players give the film some color, notably the little people playing the Dwarfs and Nathan Lane as the Queen's sycophantic servant, but this film really needed at least one of its main female characters to stand out, if not both of them.
MIRROR, MIRROR was directed by Tarsem Singh, who made his mark with the visually stunning films THE CELL and THE FALL. There's little of the style that made those movies so distinctive on display here, giving the affair the feeling of work for hire. That's not to say he does a bad job, but the job he does cold have been done by just about any competent filmmaker.
All criticisms aside, as a lightweight comic fantasy aimed at general audiences MIRROR, MIRROR is reasonably entertaining and offers enough laughs and thrills to meet, though by no means exceed, expectations. At the same time, I can't shake the feeling that this could have been a more interesting film, and there are little moments here and there where it feels like the director thought so, too. For instance, an iconic scene involving an apple, where for just a moment not only does the Queen seem human and tragic, but Snow comes off as a bit mean spirited and petty. Perhaps I'm reading more into this moment than was intended, but to me it hints at the truly Wicked twist this film could have put on the tale if commercial considerations hadn't been as big a factor. 2 1/2 out of 4 stars.
Posted by Bob Ignizio at 12:01 AM