London River (March 3rd and 4th at the Cleveland Cinematheque) 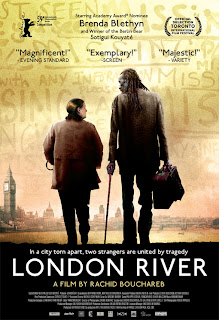 The London bomb attacks of July 7, 2005, which killed 56 people and injured hundreds, are the backdrop of Rachid Boucharib's quiet drama LONDON RIVER. Boucharib is known primarily for politically themed films, but LONDON RIVER, despite its documentary premise, is primarily a human story, a lovely duet between two exceptional actors. (The film was made in 2009, but not released until 2011.)
Brenda Blethyn plays Elisabeth, a middle-class English widow living tending her farm in Guernsey (off the coast of Norway). After the bombings, she is unable to reach her daughter, a student in London. Panicked, she travels to London to search for her. From her first glimpse of her daughter's flat behind a Halal butcher shop, Elisabeth is discomfited by the cultural diversity of contemporary London. “This place is absolutely crawling with Muslims!” she tells her brother on the telephone.


She joins paths with Ouysmane (the late Sotigui Kouyaté), a laconic West African Muslim who is searching for his missing son. Ouysmane, a lanky, elderly man with long braids and a cane, is divorced and has not seen his grown son since he was 6. Ouysmane contacts Elisabeth with some information about their missing children, and Elisabeth, mistrustful of this black Muslim man, immediately calls police. Eventually her wariness recedes and the two bereft parents – who come from different worlds but discover they have much in common – form an alliance that deepens into a gently warm friendship. (They are both fluent in French and communicate in that language.) Boucharib's screenplay has a certain predictability and a few implausible moments, but it handles issues of anti-Islamist sentiment with humanity. Though Elisabeth displays the xenophobia not uncommon to her age and class, Boucharib does not render her a monster. Her emotional reaction to the situation are nicely contrasted with Ouysmane's quiet resignation (“It is God's will.”)
Elisabeth and Ouysmane's journey, marked by fear, sorrow and hope, takes them to a mosque, an Arabic-language classroom and a series of hospitals. While the deepening mystery of what happened to the young people is compelling, it is the nuanced acting and the craftsmanship of Boucharib's filmmaking that make LONDON RIVER remarkable. Jérôme Alméras' elegant, understated cinematography and the quietly mournful score by Armand Amar create an exquisite sense of place and time. (3 1/2 out of 4 stars)
Posted by Pamela Zoslov at 12:01 AM