[LEAVING screens Thursday March 29th at 11:30 am, Saturday March 31st at 5:30 pm, and Sunday April 1st at 9:10 am at Tower City Cinemas as part of the Cleveland International Film Festival.]
Review by Bob Ignizio 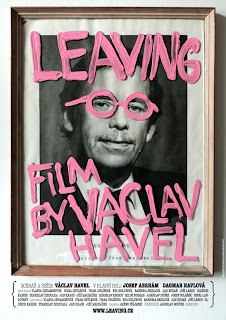 The late Václav Havel 's experiences as President of the Czech Republic no doubt provide the foundation for much of LEAVING (Odcházení), a surreal comedy about the president of an unnamed European country trying to cope with the transition back to private life. Vilem Rieger (Josef Abrhám) doesn't seem quite ready to give up his power and influence, and is even less prepared to give up the comfortable palace the State has allowed him to reside in while serving his elected term. Neither Rieger's wife Irena (Dagmar Havlová) nor his mother (Vlasta Chramostová) seem to fully grasp that they will soon need to seek new accommodations. It's not even certain which of their belongings they'll be able to take with them, as many items were gifts to the President, and therefore State property.
Even in the midst of these drastic changes, Rieger continues to spout off about his achievements to anyone who will listen, which in this case is a reporter from a paper that has never had anything good to say about the former President. More appealing is the pretty young political science student who wants Rieger's autograph, at least for starters. In one of the film's many wonderful touches, the first time we see this student she is literally walking on water, symbolizing the way the womanizing Rieger sees the fairer sex as divine, at least while his passions are inflamed. His insensitive treatment of Irena shows that attitude doesn't last.


At its core, however, the main thrust of LEAVING is to show how even the best intentioned individuals can fail when given the reins of political power. Of course the old adage of power corrupting is depicted, but just as damaging is the way in which the bubble in which a leader lives his or her life keeps them isolated from the reality of what's going on around them. This is illustrated best in the film through Reiger's groundskeeper, who always seems to know what developments are taking place well before his employer.
As writer/director, Havel handles this material with humor and a light touch without diminishing its importance. There are plenty of laughs, to be sure, but there's a fair amount of insight into the workings of politics as well, the kind that can only come from first-hand experience. Obviously at least some of this is autobiographical to some extent, but while Havel seems to be looking for forgiveness for his own failings as a leader, he doesn't completely let himself off the hook, either. 4 out of 4 stars.
Posted by Bob Ignizio at 12:01 AM