L'Argent (March 10th and 11th at the Cleveland Cinematheque) 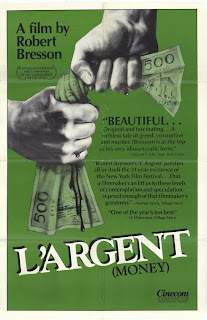 I just happened to watch (because I found it in a free giveaway bin, or the trash or something) a VHS of previous generation's awful "steamy erotic psychothriller" entitled FINAL ANALYSIS with Richard Gere. Maybe I shouldn't even have told you the title. Point is, Uma Thurman and Kim Basinger play troubled sisters. Get this: Uma Thurman is supposed to be the ugly one. No, there's no Rick Baker or Stan Winston or Westmore family makeup magic to hag her up, it's young Uma Thurman all right. And she's supposed to be the ugly one. The Kim Basinger character has an affair and gets naked with forensic shrink Richard Gere, which is very brave, because he's so ugly too, you know. I'd have to check the gossip offscreen, but I think Gere was married at the time to the very ugly Cindy Crawford.

It's a personal choice, I suppose (probably governed by whether one has a lifetime pass to the Cedar Lee or something), if one watches Hollywood high-kitsch like FINAL ANALYSIS just to take a break from excellent world cinema like Robert Bresson's L'ARGENT or if watching L'ARGENT makes a home remedy after sitting through a FINAL ANALYSIS. Either way, the message is, check out L'ARGENT, if you can, just to remember that not all movies are car chases, CGI and Uma Thurman cast as the homely one.
The acclaimed 1984 French drama (L'ARGENT, that is) follows much of the canon of Bresson, a very devout Catholic writer-director - lost half the blog readership right there; guess we'll all see you at THE AVENGERS, kids - who, over a long, distinguished career, made a number of deliberate, sober dramas, generally of a spiritual nature and/or drawn from literature. L'ARGENT, takes a Tolstoy story as its inspiration for a low-key but effectively moving narrative that shows one sin snowballing into deep tragedy. It starts with a kid not able to get money from his parents to spend at a camera shop, accepting a counterfeit bill printed by a classmate. Could never happen today - now he'd just download the bill himself from the internet in the school media center. Or he'd just steal the camera.
The funny money passes from one savvy user to another, until it reaches one poor deliveryman who doesn't realize it's a counterfeit, and he gets arrested for trying to use it. The ensuing loss of his job forces the desperate family man to participate in a robbery that doesn't go very well, then a prison term that doesn't go very well as well. Ensuit, as we watch the single act of immorality sets in motion a chain reaction of bleakly money-related crimes like tumbling dominoes, where pity and forgiveness are in short supply ("Christian" values and kindness observed only by a few cellblock personnel and an old woman fated to be murdered), while casual selfishness and greed are the rule.
I'm given to understand that Bresson's film, an award-winner at Cannes, caused a stir in France at the time via what we American capitalist pigs would call "stunt casting"; in an otherwise no-name (even for France) acting ensemble the wife of the ill-fated deliveryman was essayed by Caroline Lang, daughter of French Minster of Culture Jack Lang, who was a well-known socialist. The French right-wing took that as the filmmaker's endorsement of socialism, in a movie whose simple message, crystallized if my memory serves by the critic of Time Magazine, is greed kills (that was back in the days before Time ran cover stories about how cool Spider-Man is). I'll bet American dittohead conservatives would've crucified any filmmaker here in similar circumstances - if not for casting a conspicuously left-leaning actress, than at least for suggesting so plainly that greed kills. Whatever the Wall Street guys were watching in 1984 in theaters probably wasn't this but the 1984 equivalent of FINAL ANALYSIS.
Oh, now I've gone and watched the 1987 Whoopi Goldberg cops-vs.-drugs shoot-em-up FATAL BEAUTY (found on a VHS bootleg; I just wanted to check it out before I taped over it), which is as much a piece of irredeemably awful and offensive commercial garbage as would make anyone want to send a Terminator robot back in time with the names and addresses of the Lumiere Brothers in Paris and abort this cinema stuff at the source (hey, Scorsese, that sounds like a HUGO sequel to me). At least I've got a DVD of Bresson's LANCELOT DU LAC hoarded away somewhere to help me possibly recuperate. Do you?
(3 1/2 out of 4 stars)
Posted by Charles Cassady Jr. at 12:01 AM