The Inkeepers (March 10th and 11th at the Cleveland Cinematheque)

[THE INNKEEPERS screens Saturday March 10th at 9:45 pm and Sunday March 11th at 8:10 pm at the Cleveland Cinematheque.]
Review by Bob Ignizio 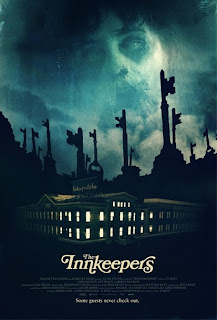 The Yankee Pedlar Inn is going out of business, and with nearly all the rooms vacant it's not hard to see why. With little actual work to do, employees Claire (Sara Paxton) and Luke (Pat Healy) decide to pass the time by engaging in some amateur ghost hunting. Evidently the place is haunted by the spirit of a woman who died while waiting for her fiance to arrive. Luke claims to have seen this apparition firsthand, and has brought along his fancy tape recorder in hopes of capturing some EVPs (electronic voice phenomenon) in order to obtain proof. The hotel's few guests are former television star Leanne Rease-Jones (Kelly McGillis), now a new age healer who just so happens to be able to commune with the spirit world, a mother and her son, and a late arriving elderly man who asks to stay in a specific room that holds special memories for him.
Like writer/director Ti West's 2009 film HOUSE OF THE DEVIL, THE INNKEEPERS is a seriously slow burning film. That made HOUSE seem like a nice change of pace from most modern horror films at first, but after endless shots of his protagonist wandering aimlessly though a house listening to her walkman, the slow burn sort of fizzled out, only to burst back to life for a frenetic but ultimately unsatisfying conclusion.


Thankfully, unlike the protagonist of HOUSE, Claire at least has some other characters to interact with. West also gives us a few more preliminary chills here before unleashing the full-tilt scary in the final act. All in all, everything West did well before, he does equally so here again while also making improvements to his formula. Sadly, not enough improvements to fully win this reviewer over. Which is a shame, because it really wouldn’t have take much more.
So what's missing here? Any semblance of motivation for why the evil forces, whether supernatural or psychological, do what they do, mainly. It's probably unfair, but it's hard not to compare this movie to Stanley Kubrick's film version of Stephen King's THE SHINING. Kubrick didn't spell everything out for his audience, either, but you still understood that what Jack Nicholson's character does is mainly the result of his own personal demons, whether or not any evil spirits had a hand in stirring things up. Why the evil forces at play in this story do what they do and single out for punishment the character they do is a mystery. There are some effective scares in the big finale, but it feels very arbitrary.
West's skills as a director are strong enough that almost right to the bitter end I was still in this film's corner, waiting for that one shot or line that would tie things together and make it worth the time I had invested. There's even a scene where one character says they have something they need to tell another character that feels like it's foreshadowing some kind of revelation, but we never learn what it was that went unsaid. Nor do any other sources offer answers to the film's lingering questions. That puts me in the curious position of really liking about 95% of this movie only to be left feeling frustrated by an ending that feels empty and pointless. 2 1/2 out of 4 stars.
Posted by Bob Ignizio at 12:01 AM