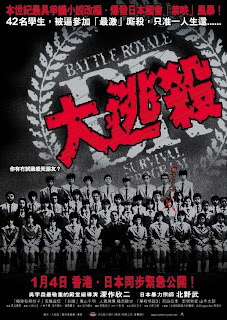 BATTLE ROYALE, a 2000 Japanese cult film that has many similarities to The Hunger Games, will be presented by the Cleveland Institute of Art Cinematheque at the Capitol Theatre (1390 W. 65th St.) on Tuesday, April 3 at 7:15 pm. This is a late addition to the Cinematheque’s already announced April schedule.
Tickets will cost $9; Cinematheque members $7; ages 25 &  under $5 (with proof of age). People under 17 must be accompanied by a parent or guardian, and no one under 15 will be admitted. Advance tickets are available at www.clevelandcinemas.com

Tuesday, April 3, at 7:15 pm
The Cinematheque at the Capitol Theatre
BATTLE ROYALE (BATORU ROWAIARU)
Japan, 2000, Kinji Fukasaku
The Cinematheque  returns to the Capitol Theatre at W. 65th and Detroit to present one of its most requested movies of the past ten years! Japan’s Battle Royale, which is finally available theatrically in the U.S., is not only one of Quentin Tarantino’s favorite movies and among the most controversial films of the last decade, it’s also a striking precursor to The Hunger Games. Set in a futuristic Japan wracked by fiscal collapse, unemployment, and rampant juvenile crime, the film depicts the implementation of a new government law that picks a 9th grade school class at random, sends it to a remote island, and forces the students to participate in the ultimate game of survival: hunting and killing each other with an assortment of weapons until only one person is left standing. Chiaki Kuriyama (Kill Bill) and Takeshi Kitano (Fireworks, Zatoichi) star in this wickedly satirical, darkly humorous, and gleefully violent action-horror comedy that has been argued, acclaimed, and banned around the world (but hasn’t been screened in Cleveland since its debut at the 2001 Cleveland Int’l Film Festival). Original uncut, uncensored, unrated version! People under 17 must be accompanied by parent or guardian, but no one under 15 admitted at all! Subtitles. Blu-ray. 114 min. Shown on the big screen at the Capitol Theatre, 1390 W. 65th St. at Detroit Ave. on Cleveland’s West Side. Admission $9; Cinematheque members and CIA I.D. holders $7; ages 25 & under $5 (with proof of age). Advance tickets available at www.clevelandcinemas.com. No Cleveland Cinemas passes or discounts will be honored. Free parking next to theatre and at other lots in the Gordon Square Arts District.