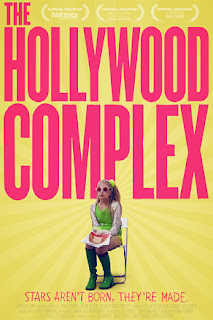 It's not as disturbing as watching an episode of Toddlers With Tiaras, but THE HOLLYWOOD COMPLEX, a new documentary on aspiring child actors and their parents, still made me root more for these kids to turn around and just go home than to score their big break. The film follows several kids and their families from across the United States who have headed out to Hollywood dreaming of stardom. Many of them stay at the Oakwood, an apartment complex that has found a niche catering to these hopefuls, particularly during the 3 month “pilot season” when potential new television series do all their casting.
So what's the harm in a little spring vacation in California, right? First of all, it ain't cheap. The kind of apartments that would probably go for five or six hundred a month here in Cleveland are thousands of dollars a month in the Hollywood burbs. Most of these families don't look like the sort who can afford to just throw away that kind of money. You have to have a certain kind of determination (or delusion) to put yourself into debt on the extremely slim chance that your kid is going to become a star when just getting a callback for a commercial is a long shot.
Most of the kids seem fairly well adjusted, even the particularly goofy one who seems to be going for some kind of 21st century pre-teen Cyndi Lauper thing. You just have to hope that continues to be the case. The track record for child stars isn't great, and on the other end of the spectrum are those kids who waste their childhoods trying to “make it” and worrying about a career when they should be having fun and playing. You only have so many years to be a kid, and once they're gone, they're gone. You'll have plenty of time later to spend looking for a job, and with the job market the way it is now, no matter what profession you pursue you'll enjoy the same odds and soul crushing disappointment that used to be reserved for those wanting to be actors, rock stars, sports heroes or astronauts. Come to think of it, maybe beginning your employment search at age 5 isn't such a bad idea, after all.
Lest you think this is nothing more than a downbeat cautionary tale, it should be pointed out that there's a fair amount of humor to be found in this film. Much of it ironic and even a little dark at times, but humor nonetheless. And even if you think these parents are all irresponsible at best and flat out despicable at worst (the father who tells asks his daughter after an audition if she's going to “make daddy rich” would seem to qualify as the latter), the kids are infectiously good natured and positive throughout, and directors Dylan Nelson and Dan Sturman make sure their humanity always comes through.
As long as movies keep using real live actors, there are probably going to be child actors. Certainly the right kid with the right parents can still enjoy their early years, save up a little money for those awkward years, and maybe even go on to bigger things as an adult relatively unscathed. Just look at Ron Howard. Then again, just look at the cast of Diff'rent Strokes. At any rate, this movie should be required viewing for any family thinking about making the trip out west. 3 out of 4 stars.
Posted by Bob Ignizio at 12:01 AM