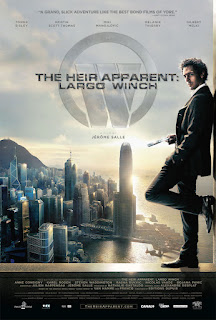 [THE HEIR APPARENT: LARGO WINCH is now available on home video.]
Review by Charles Cassady, Jr.
By now you've all enjoyed a typical feature or two at the Cleveland International Film Festival. You know, the groundbreaking Greco-Turkish co-production (dubbed in Esperanto) about the taboo love affair between the gay Taliban global-warming activist and an underaged Zionist performance-artist refugee from Darfur, and how their idyll is threatened by home foreclosure; starring Jessica Chastain in male drag in a daring transgender role, opposite "Uggie," the dog from THE ARTIST, in a daring transgender trans-species role; shot hand-held on super 8mm digital-video in unscripted real-time improvisation with a single camera and the lens cap accidentally left on. Yes, those films which leave that avid festival pass-holder asking afterwards, "Uh, that was nice, but these foreigners...Do they ever make anything that's, what's the word I'm looking for...ENTERTAINING?"
Yes they do. Check out THE HEIR APPARENT: LARGO WINCH, a costly Franco-Belgian actioner, with dialogue mostly in English avec French and other Mediterranean tongues subtitled, that bids to out-Hollywood Hollywood in terms of the high-octane land-sea-air chases, fight scenes, parkour, international locales and plot twists right out of the average Tom Cruise spy flick.
But it's a corporate thriller - yes, business shenanigans. Not like in MARGIN CALL but more like a high-bounding escapade in which the majority-stockholder shares sub for the customary missile blueprint or secret formula. Call it James Stocks-and-Bonds.
In the harbor of Hong Kong, billionaire tycoon Nerio Winch is a victim of scuba-diver assassination, meaning that the person next in line to inherit his $30 billion multinational conglomerate is  his estranged adopted son Largo (Tomer Sisley), a fashionably rebellious sweat-shirted adventurer who, when we first see him, is in Brazil getting a shamanist tattoo that's supposed to render him invincible - but the ink-job is left incomplete when Largo picks a fight with local bullies employed as muscle by the multinationals, so there (now where was that detail in the tat-fascination of HANGOVER 2?).
While the media swallows the excuse that Nerio died of natural causes, a hostile takeover looms for the Winch empire from a gunrunner-entrepreneur (Karel Roden). Largo returns from Brazil to stubbornly pursues his own maverick inquiry into the murder, surrounded by boardroom sharks, shifty allies, a comic-relief butler, vicious enemies and more than one pretty girl. No, at no point does the hero say "The name is Winch...Largo Winch."
In what passes for a redeeming social-value message, Largo explains that despite his upbringing and mentoring he rejects corporate values and materialism. But the Bond girl...I'm sorry, the Winch girl who serves as the questionably loyal heroine points out that it's easy to say you don't care about money when your family has $30 billion. I'll bet if they remake this for Hollywood (get rid of those subtitles; hurts Americans' heads to read them) that pithy rejoinder gets taken out.
Although who did what and when gets confused at times, the pace is more stirring than shaken, the escapism brisk enough to make one forget that in the present world economy, $30 billion is just what most companies are in hock for (I'm going to apply for an opening with an AOL subsidiary anyway, even though the letters now stand for Always Ongoing Layoffs). You never do learn exactly what the main source of Winch income is. Maybe they manufacture going-out-of-business signs.
I'd say the Daniel Craig CASINO ROYALE (even though I didn't slobber over it like all the other critics) makes a good yardstick comparison here. Arguably THE HEIR APPARENT is even better, getting the job done - at least someone still has a job - as sumptuous mass-audience entertainment with cool international locations, literal cliffhangers and a photogenic ensemble of overseas actors.
Oh yes, and it's based on a European comic book, not that I've ever heard of it before. Yes Another Damned Comic-Book Adaptation! That's usually points off with me (yes, I'm sure director Jerome Salle gets away from the campy, silly Largo Winch of the 1960s and back to the original dark, brooding, psychotic Largo Winch of the 30s and 40s), but this time I'll let the offense slide. I've seen too many Cleveland International Film Festival movies and have the damaged personal life to prove it. (3 out of 4 stars)
Posted by Charles Cassady Jr. at 12:01 AM