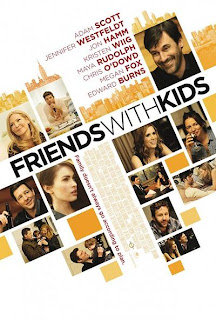 There's been a recent spate of film and television comedies centered around the emotional intricacies of sexual relationships, ranging from same-aged hump buddies to slavering, MILFish cougars. Whether these pieces ever exist to truly upend Western culture's insistence on a monogamous status quo, or simply to provide backdoor reinforcement of arbitrary social norms is a conversation for another paragraph - for now, here comes Jennifer Westerfeldt's (writer of KISSING JESSICA STEIN) directorial debut: the unfortunately named, delightfully cast FRIENDS WITH KIDS, arriving to pitch a new spin on the "non-traditional" (while still arrow-straight) relationship: two friends and a baby. Flitting between Apatow raunch and Everybody Loves Situational Comedies-par domestic observational humor, the film, at its best, offers an honest (if unnecessary) take on American romantic stereotypes. At its worst, it's an overlong war of attrition between the rebellious spirit of an over-chatty indie and the syrupy structure of a second-run rom-com.


For having such an out-of-the-box premise, the movie actually gets off to a somewhat promising start. Noticing that the birthing of children has turned their buddies' marriages into stone-cold drags, aging lifelong best friends Jason (Parks and Recreation's Adam Scott) and Julie (Westerfeldt) decide to have a baby while they're still single so they can each put in time with the kidlet without giving up freedom, dating or happiness. Said promising start obviously isn't in the premise, but rather in Westerfeldt's ability to keep things moving, through the awkward conception, profanity-laden birth and resulting child's infanthood, while intermittently cutting back to the skeptical married couples who unwittingly inspired the domestic experiment.
Aside from the healthy pace and some chuckle-worthy dialogue, it's the ensemble element that sells the first half of the film. Jon Hamm (Mad Men) and Kristen Wiig (BRIDESMAIDS), though underused, epitomize, respectively, priggish dissatisfaction and hollow exhaustion as Ben and Missy, whose love was founded upon a naïve, youthful horniness that has since curdled into bitter, mutual scorn. Meanwhile, the adorable Maya Rudolph (AWAY WE GO) and goofy Chris O'Dowd (BRIDESMAIDS) play Leslie and Alex, an exhausted couple who, while still very much in love, often misplace their mutual affection amid the screaming, perpetual chaos of child rearing. Unfortunately, as Jason and Julie each serendipitously meet promising new lovers - Mary Jane (Mila Kunis) for him and Kurt (Ed Burns) for her - the film stumbles, falters, then grinds to a halt. The frequency with which the other characters - including even the kid - decreases noticeably, allowing viewers to not only dwell on the gnawing peccadilloes of the protagonists (Hey, wait... Jason's kind of a jerkwad) and primetime television-caliber of some of the jokes (His wife won't have sex with him anymore? Ho ho, the wit!), but also to languish in the sheer depressing predictability of the plot.


I can get past most of the workaday romantic comedy tropes - like many of these soppy follies, FRIENDS WITH KIDS is like First World Problems: The Movie, featuring a bunch of attractive, upper-middle-class white Manhattanites who are kinda sad because they're constantly getting laid by all the wrong people and [pouty voice] love is hard. What ends up really hurting the film, though, is Westerfeldt's obvious inability to commit to either swollen-hearted multiplex-ready romp or cruder, more abrasive - if still hopeful and romantic - comedy, better suited to, well, a joint like Cedar Lee. It's her unwillingness to simply give in to the limb-tangled, violin-swelling inevitable that finds the back third of the film floundering as Jason and Julie play cinema's longest game of ships in the night, their tear-frothing wakes criss-crossing an interminable ocean of slow churning, unsurprising epiphany until, finally, they collide in a final moment that is, admittedly, a bit more EYES WIDE SHUT than THE NOTEBOOK, but, eh, same idea.

Perhaps even more frustrating (and certainly more in keeping with the vapid rom-com quintessence) are the film's seeming assertions about the inevitability - and immutability - of the Western-heralded monogamous ideal. Yeah, the babe-between-buddies scheme that Jason and Julie devise is moronically half-baked, but their personal faith in an equally satisfying alternative to the prevailing manufactured, inspected and stamped social paradigm is admirable and, like, not moronic at all. To see that sort of plan go down in flames in the face of an unshakable overriding ideology - that is, to find that realistic happiness is more easily achieved by working within Western society's accepted ideals - would be a satisfying, if bittersweet, end to the film. But to suggest that there's an inherent logic or biological inevitability to the nuclear family model is disconcertingly narrow-minded. What's more, it undermines any truth an audience might discover along the way. Sure - the film laughs at the sometimes schlubby, dour, near-entropic acrobatics of marriage and monogamy... but, ultimately, puts the opposition in its place, assuring cheers from a majority that may very well be legitimately content in their own lives, but who will not leave the theater any more introspective or open-minded. (2 out of 4 Stars)
Posted by Matt Finley at 12:01 AM