[THE FORGIVENESS OF BLOOD opens in Cleveland on Friday March 9th exclusively at the Cedar Lee Theatre.] 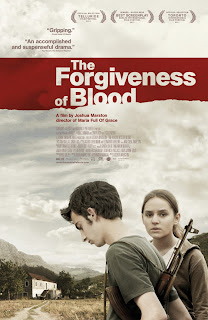 In America, it's the story of the Hatfields and the McCoys, but I imagine every country has some form of the “blood feud” in its history. In some places like the Albania of THE FORGIVENESS OF BLOOD, such feuds still take place in the present. Brother and sister Nik (Tristan Halilaj) and Rudina (Sindi Lacej) would be recognizable as everyday teenagers in any country. Nik is interested in motorbikes and girls, while his sister puts her energies into schoolwork.
Nik and Rudina's father has a dispute with his neighbor over a piece of roadway that runs through the neighbor's property. There's likely more history to the dislike these two have for each other, but that's how it's manifesting itself currently. While taking Rudina home from school in his bread truck, the father asks to use the road. Not only is he denied this, but the neighbor insults him in front of his daughter. Tempers flare, and Rudina's father returns with his brother Zef. We don't see what happens, but the neighbor winds up dead, Zef gets arrested, and Nik and Rudina's father goes into hiding.


As Shakespeare wrote in The Merchant of Venice, “the sins of the father are to be laid upon the children”. The dead man's family feels they are owed a blood debt for his death, and if they can't take it out directly on the ones responsible, then one of the male children will do just as well. So Nik and his younger brother Dren, along with the rest of the family, isolate themselves in their home hoping that some sort of mediation can take place to settle the feud without anyone else dying. Since female children are evidently exempt, it's up to Rudina to take over the bread route and keep her family financially afloat.
After some passing of time with no progress towards resolving the feud, Nik comes to feel that his father cares more about saving himself than his family. It's up to the present generation to take matters into their own hands and move beyond these pointless old ways. While that applies directly to the situation at hand, it also speaks to wider issues beyond any one family or country. These themes are contained within a fairly straight forward, naturalistic drama. There's no flashy stylistic touches or movie star posturing, just a strong story realized by solid performances and direction. 3 out of 4 stars.
Posted by Bob Ignizio at 12:01 AM