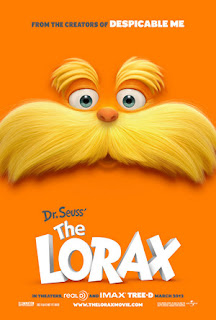 Theodor Geisel used anapestic tetrameter in 1971’s The Lorax to tell the story of a disgraced industrialist who realizes too late that plundering the environment for profit might not be in anyone’s best interest, including his own.  Unlike Geisel’s other surreal character creations like Cat in the Hat and Horton the Elephant, the enigmatic Once-Ler is never actually seen in the book.  Rather, we glimpse his green-gloved arms through the boarded window of his cantilevered house, a pulpit from which the repentant manufacturer narrates his own biography to an inquisitive boy.
But we’re the audience, too—forty years later.
Directed by Chris Renaud (who helmed DESPICABLE ME for Illumination Entertainment), the movie adaptation of THE LORAX expands on Geisel’s ecology lesson in ways that will enlighten children as well as enthrall them (and perhaps their Seuss-reared parents).  The illustrated fable is now an eighty-five minute moving Technicolor dream inhabited by Swamee Swans, Bar-ba-Loot Bears, and Humming Fish (who traipse on land).  Script-writers Ken Daurio and Cinco Paul (HORTON HEARS A WHO!) dispense with the Doctor’s rigid rhyme scheme in favor of a free verse parable full of colorful characters with their own unique motivations and perspectives.
Following a tip from his grandmother (Betty White), curious teen Ted (played by Zac Efron and named for Geisel) leaves his enclosed artificial city, braving the muckety-muck and gluppity-glup to learn why the outside world is so polluted, and what happened the trees.  Ted’s got his eye on Audrey, the artsy girl next door (voiced by Taylor Swift and named for Geisel’s wife) who fantasizes about real trees the way today’s kids imagine unicorns.  Audrey says she’ll marry any man who could give her one, so Ted’s going to get to the bottom of all this.  Then maybe his mother can get rid of her electric tree—which she can dial up for “Summer,” “Winter,” or “Disco.”
The Once-Ler (Ed Helms) indulges Ted’s interrogation but knows what’s at stake.  Nobody would go through the trouble of evading the electronic eyes of the Oligarchic city and breeching the city wall on a motorbike just to ask ridiculous questions about trees unless they truly cared.  Ted’s concern is literally the seed of hope Once-Ler’s been waiting for.
“When a guy does something dumb once, it’s because he’s a guy,” Once-Ler observes.  “He does something dumb twice, it’s usually for a girl.”
So begins Once-Ler’s acid flashback, wherein he and his trusted donkey leave home in a covered wagon to strike it rich with a fabulous new invention everyone needs.  But when he chops down a Truffula tree to harvest its billowy bounty, a mystical orange creature with a yellow moustache is ejected from the exposed stump to prey upon Once-Ler’s conscience.
“I speak for the trees,” declares The Lorax (Danny Devito). “You’ve got to promise not to chop down any more!”
Once-Ler agrees, only to renege when his thneed becomes the fashion hit of the town. He summons his goofy extended family to help industrialize the entire valley.  He bribes the bears with marshmallows induce mass torpor, not unlike the one washing over the brainless folks snatching up his one-size-fits-all super-sweaters.  The filth-belching factory closes for good, leaving the land tree-less and awash in slime and Once-Ler and the Lorax in détente.
His confession complete, the elderly Once-Ler entrusts future boy with the very last Truffula seed—but Ted and Audrey must elude nasty Mayor O’Hare (Rob Riggle) and his towering twin henchmen to get it planted in Thneedville town square, where genuine soil is scarce.  The most dastardly diminutive villain this side of Lord Farquad (SHREK), O’Hare comes off like a cartoon cross between Edna Mode from THE INCREDIBLES and Moe from The Three Stooges.  He’s easily the most dastardly diminutive villain this side of SHREK’s Lord Farquad, selling packaged air to constituents, stealing cookies, and calling for the death of a sapling in song.
“People will buy anything if you put it in a plastic bottle,” scoffs the money-minded monarch.
If Geisel’s sugarcoated warnings about the dangers of rampant logging and blind consumerism sink in with today’s attention-challenged iKids (who don’t know the meaning of deeelaaaayed gratification), so much the better for those who would inherit our fluorocarbon-choked planet.  Like a Mother Goose proverb on steroids, LORAX is a visually-stimulating teaching opportunity that makes effective use of Devito’s gruff charm (a la Louie DePalma from Taxi) and Efron’s noble innocence.  But be prepared for orange overdose: Thneedville’s furry friends are like splashes of Sunkist with eyeballs.  The computer animation is solid, however, with Illumination’s French designers faithfully interpreting Seuss’ cotton-candy foliage, lopsided, M.C. Escher architecture, and odd-shaped critters in pixelated 3D glory.  Just be sure to recycle those glasses; let's not be hypocrites, now!
Hans Zimmer protégée John Powell (, HAPPY FEET 2) keeps things bouncing along nicely with a score befitting eco-crisis in a Teflon-coated Plasticine dystopia occupied by Elmer Fudds and Olive Oyls with Aldous Huxley anxieties.  2 ½ out of 4 stars.
Posted by Peter M. Roche at 12:01 AM