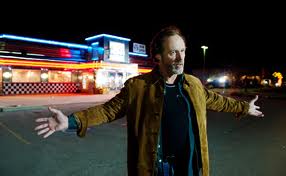 I may not be the best choice to review native Christina Grozik’s filmed-in-Cleveland short drama
DARK BEFORE DAWN, for only-in-Cleveland reasons that will take a bit of time to explain. The dramatic short, slickly shot on video starts off with a premise virtually identical to a short subject I wrote in college, that was never made (indeed, I’m not sure
I ever showed the script to anyone). So watching the finished film was a weird sense of deja-vu-but-not-really.

(And no, I’m not going to say that J.K. Rowling stole the idea for Harry Potter from me. No, she stole it from those two who wrote Holy Blood, Holy Grail. Thanks, if this were a stadium show one person in the very back rows would have laughed at that one, and only after researching it on the smart phone).

You may wonder why I wrote a script at college and never did anything with it. Or more to the point, why did I even bother when I wasn’t even in the film program; I was studying Journalism, with the notion that there might be more job opportunities in the utilitarian written word, especially if I got stuck in
(there weren’t).

But I liked the crazy energy and foolhardy confidence of the film majors and hung around with some. I guess I just had to write one scenario for myself just to see if I could do it. And in the strange event anyone needed a workable script, I’d have one. College is a surreal place; maybe it’s no wonder so many horror movies take place at them.

I must say, every once in a while I do a cursory online search of some of the old campus film crowd whose names I remember, just to see if any of them made it in the industry. Only one did, that I found, and he co-manages a studio in NYC commercial-advertising production. So next time I tell you a degree is worthless, please correct me: Almost worthless.

So what was my unproduced script? Taking a cue from a one-panel cartoon gag I saw (so not even original on that count) I did an ostensibly tragicomic piece in which a guy, I think a badly blocked writer, decides to commit suicide. He starts writing his suicide note but finds he can’t stop writing it. It gets longer and longer and longer… As to what happens in the end, I leave it to your imagination. But I promise, it was a twist only a 20-year-old jobless guy with no girlfriend would consider acceptably clever. And then, only barely.

So it was a most spooky sensation to watch the opening of DARK BEFORE DAWN. My script! How’d they get it? How’d I miss out on the wacky behind-the-scenes hijinks? All the Red Bull at the wrap party I never got to imbibe! LAWWWWWWSSSSUIT! Wait a minute, nobody here has money, never mind that last part.

In DARK BEFORE DAWN the depressed literary-minded hero is called Todd (Rick Montgomery Jr.), suffering in the aftermath of a romantic breakup, debts and the rejection of his manuscript by 130 publishers. He loads a gun and decides he’s going to kill himself – after he types out the perfect suicide note. But draft after draft fails to satisfy him. Finally, he decides to go out for a late-nite diner for one last cup of coffee while he works on the farewell.

But he’s brought the gun with him too, and the diner happens to be a hotbed of drama, leading to another twist ending, a Hallmark-Card uplifter which you may or may not buy into; just know that my script didn’t require any other characters or crowd shots. Not that mine was any better or anything - I just dreamt up an idea that would only need one actor all the way through, campus talent being what it is (hung over and/or cramming for exams most of the time). Grozik's hardworking DARK BEFORE DAWN team obviously didn’t have that problem.

What’s with all of us screenwriters and suicide? For my own part, when you are only a 20-year-old jobless guy with no girlfriend (destined to stay jobless and girlfriendless long afterwards, damn ), not getting out much, such pretentious matters of life and death come to the fore in contrived dramatics. But in the case of DARK BEFORE DAWN I noted with great interest at the end at that the picture is dedicated to Alan Schechter. Ah, that explains it in full.

Mr. Schechter was a young native-turned-Hollywood-producer who brought genuine West Coast film production here on a regular basis, back in the days when something on the scale of THE AVENGERS shooting in downtown was unimaginable (among other things there were fewer empty storefronts on to hijack). From 1993 to 2003 Schechter brought four feature films and a TV project to shoot in . Sure, all of them were low-budget action-adventures (perhaps the best-known being a minor videograme adaptation, DOUBLE DRAGON) that mainly went direct-to-cable or DVD. It was still farther than a lot of pics get, especially homegrown ones. Nonetheless, in 2005 Alan Schechter killed himself with a gun in his small apartment.

The Plain Dealer, which had covered Schechter’s exploits over the years, wrote of his end in an especially melodramatic (but scrupulously sourced) cycle of articles, the journalistic verdict being that professional failures and personal demons finally overwhelmed him at this 40th birthday. There was also the interpretation that some of the large-scale explosions and mayhem Schechter staged here expressed latent hostility at the town, where he’d grown up in a divorce-strewn household under a mom who sometimes took him with her on alcoholic West Side pub crawls.

(Okay then, by that logic Marvel Comics must REALLY hate . What, Stan Lee get constant job turndowns here after graduation, like me?)

Well, maybe. I don’t know. Between , family dysfunction, alcoholism and a career in cinema, so much can/will break your heart and destroy your soul I can’t begin to judge Mr. Schechter. But Christina Grozik worked with him earlier in her career and seems to remember him with much fondness.

And if I were to sum up DARK BEFORE DAWN, it perhaps dramatizes the fate of Alan Schechter - not as it actually went down, but as his friends would have preferred it played out, with redemption and a happy ending. So take that knowledge with you if you determine to see it.

In my largely defunct life as a local-film columnist I had the opportunity to speak to Schechter once or twice. He was always polite and accommodating, and I tried not to distract him too much from the chores of coordinating his f/x squibs and stunts. One thing he told me that I’ll never forget, that in his dream project Apache attack helicopters would fire missiles straight down . For what it’s worth, I put the imagery out there, for Christina Grozik or any other filmmaker to find an excuse to do. Even the idle alumni. (2 ½ out of 4 stars)
Posted by Charles Cassady Jr. at 12:01 AM