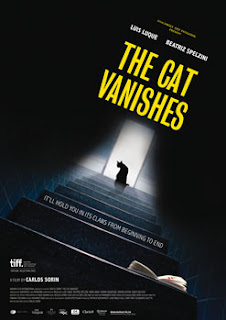 In the grip of delusion, Professor Luis Romero (Luis Luque) assaulted a colleague he believed was stealing his research and might well have done the same to his wife Beatriz (Maria Abadi) if he had been able to get to her. Well, as Norman Bates once said, we all go a little mad sometimes. After spending some time in an institution, the Professor is pronounced cured, or at least close enough to be let back out into society provided he takes his medication. The one troubling factor in all this is that brain scans of Luis show no abnormalities, meaning the seemingly aberrant behavior he exhibited falls within the “normal” parameters of what he's capable of.
On the one hand, Beatriz is happy to have her husband back home again. At the same time, she's understandably a bit nervous. Luis seems to be his old, good natured self – his students say he's even more easy-going than before. But something seems... off. Even the family cat senses it, giving the professor a scratch as a “welcome home” present. Shortly thereafter, the cat, to quote the film's title, vanishes, and Beatriz fears Luis may have something to do with it.


A storm the first night Luis is home seems to signal a descent into madness, but is it Luis having a relapse, or Beatriz having a nervous breakdown from trying to deal with her fears? The Argentinian film THE CAT VANISHES keeps us guessing right up until its final moments, making it the rare mystery/suspense film these days that truly is mysterious without having to resort to any gimmicky twists. In fact we're not even sure for quite some time that there is a mystery; this could just as easily be a drama about a couple trying to reconnect after a trauma that uses the tropes of the mystery genre. Or maybe it's a bit of both. You'll just have to watch for yourself to find out.
As the title implies, THE CAT VANISHES is something of a Hitchcock homage. There is indeed a certain cinematic classicism to the film's style, but writer/director Carlos Sorin isn't simply aping Hitchcock; he's got his own style and sensibility that blends the best of old school Hollywood filmmaking with a modern sensibility. It's not a painstaking attempt to replicate the films of the past like THE ARTIST or MACHETE (both of which I loved, mind you), but a film very much of its time that is nonetheless informed by the past. The same is true of composer (and son of the director) Nicolás Sorin's score which at times sounds appropriately old fashioned, while at others is dissonant and downright experimental. Along with the excellent performances, it all adds up to a film that is a true joy to experience. 4 out of 4 stars.
Posted by Bob Ignizio at 12:01 AM