Alice (March 23rd and 24th at the Cleveland Cinematheque) 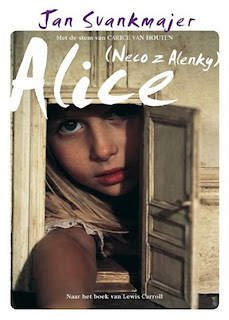 According to the infallible Wikipedia, the title of Czech auteur Jan Švankmajer's 1988 debut feature, Něco z Alenky, literally translates to, "Something From Alice." Right or wrong, it's a much more apt and evocative title for the surrealist mix of stop motion and live action than its drab official Anglicization: ALICE. Presenting a visually audacious, narratively faithful adaptation of Lewis Carroll's Alice's Adventures in Wonderland, the film is, in the most straightforward, literary sense, something from Alice. At the same time, Švankmajer's goal in making the movie - to reclaim the thorny complexity of Carroll's original tale from the spate of popularized, Disneyfications - meant portraying the story as a dark and beautiful dream, the reconfiguration of the world by desires, phobias, urges and ideas, all of them spilling from the mind of a girl. These visions, narrated by her intermittently full-screen stoic lips, are also something from Alice. Something both wicked and lovely, cast in sawdust and fabric and cardboard and bone.
Because ALICE combines a fully realized and unique visual aesthetic with an adoring, at times painstaking, dedication to the events and characters of Carroll’s book (though, understandably for a primarily visual piece, cutting out much of the dialogue), the film manages an alien comfort that displaces the viewer to an eerie, sometimes frightening, universe that's still composed of familiar images and scenes. The white rabbit, a google-eyed bit of taxidermy that forcefully extricates itself from a glass case, still dons gloves and a cape, and races through the film, bemoaning his tardiness; the animals who attempt to remove Alice from the rabbit's house are monstrosities in miniature, a clattering assortment of bones, talons and household ephemera, yet they still come rushing in with a ladder and send the lizard down the chimney; Even the caterpillar, a disconcertingly phallic sock perched atop a wooden mushroom in a space full of other borrowing, wormy footwear, offers Alice two size-altering slivers from his faux fungal perch.

The bulk of Švankmajer’s reconstruction of wonderland’s familiar landscape is achieved by stripping away the bucolic, natural surrounds and turning the whole fantastical shebang into what looks like an Eastern European tenement building. (Alice even arrives in an invisible, though audibly antiquated, elevator). Walls are flaking, age-stained laundry flops over crudely hung clotheslines, and the furniture is falling apart.

Despite the strangeness of it all, the visuals are bolstered by much more than an adolescent fascination with ironic juxtaposition, or creepy for the sake of creepy. Švankmajer isn’t simply using Alice’s Adventures in Wonderland as a darkness-aimed springboard for subverting images of innocence – he’s questioning the nature of innocence (and malevolence, and justice, and truth) by wresting Carroll’s story away from the safe, moral binary of the modern fairy tale. Rather than projecting Alice's trip through the lens of children's fantasy, which is used to impart cuturally subjective wisdom or ideals, thereby, defining and reinforcing innocence (etc.) as a natural state of the human condition, ALICE returns the narrative to the amoral realm of the subconscious - a actual magical realm where experience, knowledge, and desire coalesce into the churning visage of truth that, though formed in the image of everyday things, is largely indecipherable, and immune to the blunt influence of soci-ideological constructs. Alice’s journey, then, isn’t an outward jaunt into the glorious unknown, but a revealing inward trek toward the unknowable familiar. It's a place where seemingly surreal images - out-growing a house; imprisonment in an adult-sized porcelain skin, and a cardboard queen who, one by one, decapitates her court - bear overwhelming significance in revealing the frothing, indefatigable id roiling beneath the surface of alleged innocence.

Švankmajer grants us a single scene set outdoors: the film opens on Alice and an older girl sitting by a stream. As the older girl silently reads, Alice chucks rocks into the water. Instantly, we are transported indoors, to a cluttered room that looks more like a pawn shop frequented by Victorian doctors and practitioners of the occult than a young girl’s bedroom. Furthermore, as in another fairy tale-varnished literary adaptation, THE WIZARD OF OZ, these surroundings (in this case, sundry specimen jars, fetishes, and trinkets) ultimately combine to form the odd architecture and citizens of her dreamworld. At first, it seems like a pretty well-worn gimmick for an otherwise uncompromising piece of art.
But, while watching, consider this: Alice never leaves that riverbank, but instead enters a state of contemplation, and, eventually, sleeps. The room is her conscious mind, all the ideas and impulses, the dark yens and carnal, reptilian remnants, the shameful curiosities and fears, both legitimate and irrational, stacked up and ordered, each with its own neural shelf or drawer or case. But in entering sleep, these once-organized trifles dismount and run wild, through forbidden territories and the fringes of dreams, through memory and prescience, through nightmares and wonderlands. 3 1/2 out of 4 stars.
Posted by Matt Finley at 12:01 AM