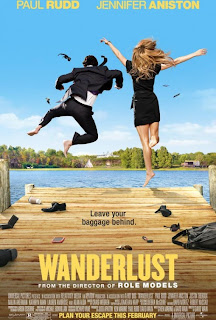 The comedy of David Wain, who comes from Shaker Heights, Ohio, is not for everyone. After the preview screening of his latest movie, WANDERLUST, some older audience members made their way out of the aisles shaking their heads and saying words like “disgusting!” Well, I certainly wouldn't recommend it to my 86-year-old dad. But tastelessness is a style choice, and has long been the hallmark of sketch comedian Wain (WET HOT AMERICAN SUMMER, THE TEN) and his longtime writing partner, Ken Marino. If you don't mind a lot of gross absurdity, Wain and Marino's comedy can be pretty hilarious.


With WANDERLUST, Wain weds his signature scattershot humor to a more traditional romantic comedy format in the style of Judd Apatow (whose company produced this movie). The stylistic marriage is not an entirely happy one. The romantic story, grounded in recognizable reality in Manhattan and Atlanta, and the silly comedy, located in a fantasy hippie commune, compete for prominence, and both emerge rather worse for it.
The movie reunites Paul Rudd and Jennifer Aniston, who co-starred in THE OBJECT OF MY AFFECTION, as a Manhattan couple struggling with declining job prospects. George, who works in finance, loses his job after the Feds shut down the firm he works for. Linda, a dilettante whose latest venture is making documentary films, tries to pitch her latest film (described as a cross between AN INCONVENIENT TRUTH and MARCH OF THE PENGUINS) to HBO, which rejects it as too depressing. Rudd, a Wain regular, and Aniston make a credible and appealing couple, and the New York scenes, centering on the shoebox-tiny apartment (or “micro-loft”) George and Linda buy before their fortunes decline, have a gentle satiric charm. Disappointingly, the movie marches into fantasy-land when George and Linda stumble into Elysium, an anachronistic commune in Georgia, on their way to Atlanta, where George's nasty brother Rick (Marino) has agreed to give George a job (as it turns out, in the Port-O-Potty business).
The commune, owned by the aging, wheelchair-riding Garvin (Alan Alda), is home to a motley group of unreconstructed hippies who strum guitars, smoke pot, shun animal foods, drink hallucinogenic tea, grow organic vegetables, make wine in the nude, and engage in “free love.” The leading hippie is Seth (Justin Theroux, Aniston's real-life boyfriend), a long-haired guru type who has designs on Linda. The commune's ideas are wacky, retro-'60s stuff – they don't believe in doors, so in Wain's world, that means that a horse might wander into their bedroom, and that various commune members casually visit George while he's on the toilet. Yet the commune embraces George and Linda so warmly, and the vibe is so relaxing, they decide to move in, and find paradise not as perfect as they'd hoped. (In a way, the movie is like COUPLES RETREAT with better jokes.)
There's a subplot about a planned casino development on the commune property (the group's future depends on Garvin locating his misplaced deed, which one would think is filed at the county recorder's office). But the story is entirely in the service of the gags, and there are many of them. Some are hilarious (a giant, Kafkaesque fly that strikes up a conversation with George) and others groaningly bad or, as the old people said, disgusting (parents of a newborn carrying around its placenta in a pan and promising to make soup of it).
At this historical juncture, jokes about hippies are pretty old hat. The strongest parts of the movie are the saner, human moments, sans hippies – Linda pitching her “penguins with testicular cancer” doc; George and Linda singing along to the Doobie Brothers in the car; Rick's depressed wife confronting him about his infidelities; George's nephew's sarcastic retort to his uncle's greeting; Linda and Garvin sharing a secret feast in a diner; a running joke about a novel written by the naked winemaker Wayne (Joe Lo Truglio). If I were making a structural assessment of the movie, I'd say, “Strong start. Strong finish. Sags in the middle."
But Wain is committed to silliness, and likely has no desire to be Judd Apatow. As he said in this 2007 interview with me, “My comedy doesn't stem from anger and pain so much as looking at things from a silly perspective.” (2 1/2 out of 4 stars)
Posted by Pamela Zoslov at 12:01 AM