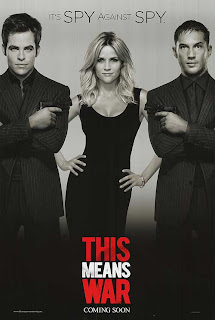 Surrounding THIS MEANS WAR, a movie about two spies who rival for a woman's affections, is the story of two studios at war over the hearts of moviegoers. Fox, the studio behind the action-comedy THIS MEANS WAR, hoped to outdo rival Sony, which was scheduled to release its sappy wife-in-a-coma movie THE VOW on Valentine's Day. Fox's strategy was to characterize THIS MEANS WAR, a movie replete with explosions, shootings, car crashes and broken stunt glass, as a romantic comedy – the perfect Valentine's Day date movie. Cooler heads and audience research prevailed, and Fox will now release the movie on February 17 to an inevitable torrent of bad reviews.
The problem isn't just that the studio doesn't understand what kind of movie THIS MEANS WAR is; it's that it only sketchily resembles a movie at all. Although it adheres to the basic structure of an action-comedy, the jokes misfire, the plot is perfunctory, and the cast, except for the zesty Reese Witherspoon, seem uncomfortable with Simon Kinberg and Timothy Dowling's haphazard script, which plays as if it were scribbled on a napkin during a boozy lunch hour. The enterprise is flaccidly directed by McG (born Joseph McGinty Nichol).
The spies, who work in a mythical L.A. field office of the CIA, are Tuck (Tom Hardy), a divorced Englishman, and his best friend, FDR (Chris Pine), a good-looking ladies' man whose presidential moniker is left unexplained (surely his parents were too young to be Rooseveltians). Alongside their typical CIA agent duties – shooting at bad guys on skyscraper rooftops – Tuck and FDR find time to hook up with the same woman, Lauren (Witherspoon), Tuck through an online dating site and FDR through a “meeting cute” moment, when he and Lauren reach for the same DVD at a video rental store. Tuck and FDR represent themselves to Lauren as, respectively, a travel agent and (I think) a cruise ship captain.
The two spy buddies make a “gentleman's agreement” to compete for Lauren's affections, utilizing the entire complement of agency personnel and technology. Whereas this might be amusing in a good spy spoof, here it's just disturbing. The pair launch a surveillance program that entails computer hacking, phone tapping and hidden cameras and microphones planted in Lauren's apartment while she shakes her booty in the kitchen to Montell Jordan.
Tuck and FDR listen in on all of Lauren's activities, including conversations with her best friend Trish (Chelsea Handler) about her dates (FDR is perturbed to hear that Lauren thinks his hands are too small). Only once is the propriety of this spying program questioned: a fellow agent, who's been told the surveillance is part of an official investigation, asks FDR whether there are any Constitutional issues. No problem, FDR blithely assures him: “The Patriot Act!”
As the dueling romances heat up, the men one-up and sabotage each other in improbable and grimly unfunny ways. Learning that Lauren likes Gustav Klimt's “The Kiss” (even the characters' tastes are clichéd), FDR dazzles her by displaying a collection of original Klimt paintings. Lauren collects miniature Camaro cars, so Tuck puts her at the wheel of a real Camaro, which she pilots like an accomplished stunt driver. Tuck's tryst with Lauren is drowned by FDR's deployment of ceiling sprinklers; FDR's erotic evening is thwarted by Tuck's well-aimed tranquilizer dart to the neck.
The movie trots out the expected “rom-com” tropes and manages to make them actually worse. Thus we have not only the wisecracking best friend of the heroine, she must also recite witlessly vulgar lines and straddle her fat husband in a carnal act that involves sharing Cheetos mouth-to-mouth. Heroine who is a workaholic and unlucky in love? Got it. Frantic sex on a kitchen counter? Check. Unconventional date activity date in an unlikely abandoned setting? Swinging on trapezes! Additionally, the story requires Lauren, who works as an industrial research scientist, to be rather stupid. She never suspects anything is amiss, and when she learns about her boyfriends' appalling deception, she's only momentarily perturbed, recovering in time to help the intelligence community fight crime with her mad stunt driving skills.
Alongside the romantic hijinks, the movie pays desultory attention to the spy-action plot, which is about Tuck and FDR's listless pursuit of a Russian gangster. (If CIA agents spend their time as these guys do, it's too bad John F. Kennedy never made good on his vow to “scatter [the Agency] to the four winds.”) And so, despite the efforts of a capable and fairly appealing cast, this would-be Valentine's Day action-comedy succeeds neither as action nor as comedy, not as date movie or even a mildly diverting way to pass a couple of hours. (1 1/2 out of 4 stars)
Posted by Pamela Zoslov at 12:01 AM