Repost: The Swell Season (February 10th and 12th at the Cleveland Museum of Art)

[THE SWELL SEASON screens Friday February 10th at 7:00 pm and Sunday February 12th at 1:30 pm at the Cleveland Museum of Art.]
Review by Bob Ignizio 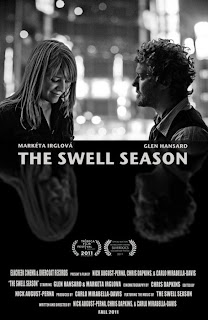 THE SWELL SEASON chronicles an eventful period between 2007 and 2010 for the folk rock duo of the same name. The group, consisting of vocalist/guitarist Glen Hansard and multi-instrumentalist/vocalist Markéta Irglová, found sudden fame after they starred in and provided several songs for the film ONCE. Their song “Falling Slowly” from that film's soundtrack went on to win the Oscar for best original song in 2008, changing everything.

Hansard has been a professional musician since his teens and had already achieved some measure of success with his other band The Frames. He seems to deal with his new found fame and fortune reasonably well, although like most indie rockers he seems bound and determined not to actually enjoy it.
Markéta is less comfortable with their situation. We don't see or hear from her nearly as much, but when we do it's usually to complain about the artificiality of fame. The idea that people she doesn't know want her to pose for pictures with them baffles her, and she worries that doing so is somehow “selling out”. Markéta's issues also seem to extend to this documentary itself. She has considerably less screen time than Glen, leaving him alone to expound at length about his early life and influences, his songwriting process, and all the usual subjects young, slightly narcisistic artists tend to ramble on about.
The only one who seems able to truly enjoy the duo's rise to stardom is Glen's mother, but just getting to the point where he can accept that his mom is proud of him proves a major struggle for Glen. Ah, the trials and tribulations of being a rock star. I guess my big question would be, if you're really all that uncomfortable with success, why not just quit or find some way to scale things back instead of doing something like, oh, letting a film crew follow you around for 3 years? Give me a good old fashioned egotistical seventies rock god over self important whiners like these any day.
To be honest, I just never really cared about the subjects of this film. As for the music The Swell Season plays, I would describe it using Jack Black's term for his fellow record store employee's mix tape in HIGH FIDELITY: sad old bastard music. I can't really fault co-directors Nick August-Perna, Chris Dapkins, and Carlo Mirabella-Davis, though. They do a good job shaping their footage into a reasonably interesting narrative, and they aren't afraid to let their subjects look bad (no doubt with the full blessing of the band in keeping with that self-loathing indie rock mentality). 3 out of 4 stars.
Posted by Bob Ignizio at 12:01 AM