Outrage (February 23rd and 25th at the Cleveland Cinematheque) 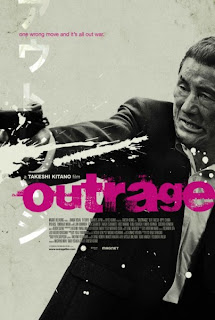 You need a scorecard in order to stand a chance of following the convoluted plot of Takeshi “Beat” Kitano's latest Japanese gangster flick OUTRAGE. I know it's a tired old cliché, but in this case it's apt. Numerous characters both major and minor from several different Yakuza clans spend the film's running time double crossing and disrespecting each other, jockeying for position, exacting revenge, and having revenge exacted upon them. Fingers get chopped off, amateur dentistry gets performed, and as high as the body count goes it seems like there's never any shortage of fresh cannon fodder.
According to Wikipedia (so it must be true), Kitano decided on the various ways his characters would meet their demise first, and then wrote the screenplay around those violent set pieces. That sounds about right. None of the characters make much of an impression and there's barely a story, but the scenes of carnage are creative and well staged.


In a way, OUTRAGE plays as more of an escalation comedy than a serious crime film, with each slight and reprisal leading to bigger and bloodier repercussions to the point that it becomes ludicrous. Even taken in that sense, however, I just didn't find the film satisfying. I like films that trade in stylish sequences of violence as much as the next guy, but I need to have at least one or two characters that are fleshed out enough for me to invest in. That never happens here, and I was left feeling completely detached from the action.
I know this is kind of a short review, but there's little about this film that stands out as either good or bad enough to stimulate any further verbiage. It's technically proficient, well acted, and looks good, but there's just not much of substance beneath the nice shiny exterior. For hardcore gangster film and “Beat” Takeshi fans only. 2 out of 4 stars.
Posted by Bob Ignizio at 12:01 AM