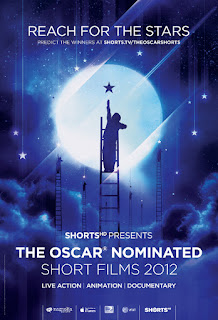 
Last but certainly not least are the documentary nominees. I only saw three of the four films in this category (Saving Face being the one I missed), but on the strenght of The Tsunami and the Cherry Blossom alone, this is the program most worth seeing. The voices of onlookers can be heard in disbelief and horror as The Tsunami and the Cherry Blossom opens with incredible footage of the Japanese tsunami of March 11, 2011. A month later we hear from the survivors, interspersed with more footage of the disaster and its aftermath. Many survivors find hope in the cherry blossoms, or sakura, that signify spring in Japan. The cherry blossoms mean many different things to many people. To many here, they signify hope.
This is an excellent film that is as much about the culture and character of the Japanese people as it is about the disaster that has befallen them. The survivors somehow manage to see a positive future, not in some blind Pollyanna way, but in a more practical sense. If the plants are hanging in there, as one man says, then the humans had better do so as well.
Incident in New Baghdad tells the story of Ethan McCord, a soldier suffering with PTSD. On July 12, 2007 group of people in streets of Baghdad were machine gunned down bu U.S. Apache helicopters, some of them civilians. McCord was there, one of the first men to arrive on foot and see the results of the helicopter attack. It was McCord who found two seriously wounded children in a truck and managed to get them medical assistance.
After the incident, McCord no longer believes he is doing good in Iraq. He feels guilt and only wants to survive and make it home to his own children. When he asked for mental health treatment to deal with his issues, he was told by the Staff Sergeant to suck it up or face repercussions. And so he did, leading to problems at home. Some will no doubt feel this film is leftist propaganda. To be sure, the filmmaker has a slant, but this is one man's story told as he sees it.
James Armstrong is an 85 year old barber and long time civil rights activist profiled in Barber of Birmingham. He's one of the “footsoldiers” in the civil rights movement whose sons were among the first to integrate in public schools with white students. As this film was being made, he has lived to see the election of Barack Obama, the first black president of the United States of America.
Armstrong's story is probably one that is worth telling, but I kind of felt as if this short documentary lost focus on its subject. We get a lot of the usual civil rights history lesson material, but not nearly enough about Mr. Armstrong himself. Not bad, but in the end it feels like a bit of a lost opportunity.
All in all, I think last year's batch of shorts were marginally better, but there's still enough here worth seeing. 2 1/2 out of 4 stars for the animated shorts, 3 out of 4 stars for the live action shorts, and 3 out of 4 stars for the documentary shorts.
Posted by Bob Ignizio at 12:01 AM