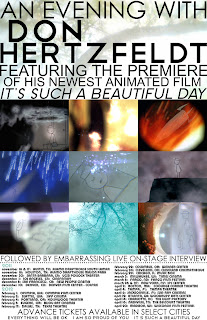 Don Hertzfeldt, an Oscar-nominated indie animator with a huge nationwide following, will make a special in-person appearance on Friday, February 24, at 7:30 pm at the Cleveland Institute of Art Cinematheque, 11141 East Boulevard in University Circle.  “An Evening with Don Hertzfeldt” will include the Cleveland premiere of Hertzfeldt’s latest work, the 23-min. It’s Such A Beautiful Day, the third and final part of his “Bill” trilogy. (A character named Bill stars in all three movies.) The other two parts of the trilogy, Everything Will Be Ok (2006) and I Am So Proud Of You (2008), another Cleveland premiere, also will be shown, along with other Hertzfeldt short films.
Hertzfeldt’s distinctive, hand-drawn, stick-figure-filled cartoons include some of the funniest and most popular short films ever shown at the Cinematheque – among them Billy’s Balloon, Rejected, and Ah, L’Amour. His movies can be surreal and absurdist, sick and twisted, poignant and tragicomic, or all of the above. Though only 35, Hertzfeldt has already won the Jury Prize at Sundance (for Everything Will Be OK), been nominated for the Short Film Palme d’Or at Cannes (for Billy’s Balloon), and been nominated for an Academy Award for Best Animated Short Film (for Rejected). His films have been shown on MTV, Bravo, the Sundance Channel, Showtime, and the Cartoon Network, among others. In 2003 he and Mike Judge founded and curated The Animation Show, a biennial tour of outstanding animated short films. (The first three Animation Shows played in Cleveland exclusively at the Cinematheque.)
Admission to “An Evening with Don Hertzfeldt” is $12; Cinematheque members and Cleveland Institute of Art I.D. holders $9; ages 25 & under $7 (with proof of age). Advance $12 and $9 tickets can be purchased online at www.brownpapertickets.com/event/216679.  $7 tickets will be sold only at the door -- after 6:45 pm on February 24.
Posted by Bob Ignizio at 12:01 AM