London Boulevard (February 11th and 12th at the Cleveland Cinematheque) 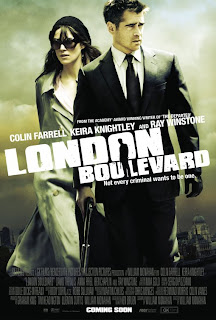 Clolin Farrell is Mitchell, an ex con fresh out of jail after serving 3 years for committing “grievous bodily harm” (assault for us Americans). Now he's trying to go straight, and to that end he takes a job as bodygurad/handyman for Charlotte (Keira Knightley), a recently retired actress known for her sexually explicit roles who continues to be hounded by paparazzi. At the same time, Mitchell finds himself drawn back into the world of crime by his friend Billy (Ben Chaplin), and by his desire to get revenge on a pair of young hoodlums responsible for the death of a friend.
After being in Charlotte's employ for a short time, it's obvious there's chemistry between her and Mitchell. He figures they're from two different worlds and have no chance of being together, but when Charlotte's friend Jordan (David Thewlis) lets Mitchell in on one of her dark secrets, he realizes they may not be so different after all. Romance may have to wait, however, because Mitchell finds himself in an awkward position with Billy's employer, no-nonsense gangster Gant (Ray Winstone).


These are just the most prominent plot threads in writer/director William Monohan's directorial debut (he previously worked on the screenplays of THE DEPARTED and BODY OF LIES). While all these characters and story elements are interesting in an of themselves, the overall film feels unfocused and cluttered, with too many subplots that add nothing to the overall work. I mean, I liked the parts of the movie with Mitchell's Indian doctor friend (Sanjeev Bhaksar) taking a shine to his seriously damaged sister (Anna Friel), but in the end what was the point?
To some degree I like Monohan's approach to the British gangster genre, neither as violently stylish as Guy Ritchie's films or as in your face quirky as IN BRUGES (don't get me wrong, I liked it, but you know I'm right). LONDON BOULEVARD instead takes a more straight forward, meat-and-potatoes approach to filmmaking, more like something that might have come out in the seventies than recent films. Unfortunately the movie never really comes together. It makes a nice showcase for the talents of its first rate cast, but it needed to be leaner and sharper and have more of a sense of urgency for us to truly care about the story they're involved in. 2 out of 4 stars.
Posted by Bob Ignizio at 12:01 AM